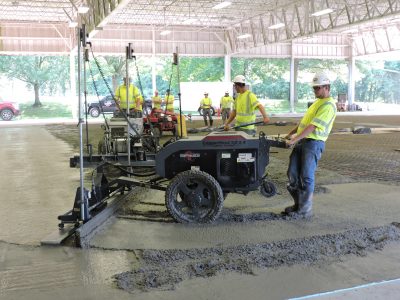 Crews both locally and from out-of-state worked to renovate the Wheeling Park Memorial Ice Rink as part of a $1.3 million renovation project.

The rink is one of the most-used facilities at Wheeling Park, and the renovation work that began this spring will bring the rink, which was over 50 years old in its previous state, to modern standards.

Dozens of workers from Wisconsin-based Double J Concrete and Masonry were on hand Friday morning to pour concrete. Locally, Savage Construction did preparation work, and Minnesota-based B32 Engineering Group, which specializes in ice rinks, designed it.

“It’s remarkable that it’s lasted 50 years,” said David Lindelow, president and CEO of the Wheeling Park Commission, who was present Friday morning. “The technology they’re using today is really very different. … The efficiency is that the depth of the ice is more precise. In the old rink, the ice varied — it was thicker or thinner in some parts. With this one, it’s more even, so there isn’t as much work the compressor system has to do to keep it frozen. The hockey players can recognize the quality of the ice.”

“It’s a new compression system that we replaced a few years ago, and now, all-new piping,” added Eriks Janelsins, Oglebay Foundation president and CEO. “It’s state-of-the-art compared to the fact that it was 50 years old.”

Demolition work for the renovation began in March. The project includes replacing more than five miles of refrigeration piping and replacing the concrete pad, as well as the concrete perimeter of the rink. On Friday, around 300 square yards of concrete were poured.

In addition to the foundation of the rink itself, the facility was also redesigned to allow two bleachers worth of spectators to sit and watch, which was not previously available.

The Oglebay Foundation amassed the $1.3 million in donor support for the project from, among others, the James B. Chambers Memorial Foundation, the Wheeling Area Hockey Association, and the Wheeling Nailers.

“It’s really been a community effort,” Lindelow added. “If not for this, the Wheeling children and residents would not have access to ice skating, so we thought this was very important to do and maintain for the next 50 years.”

The Wheeling Park rink is the only publicly available rink in Ohio County, aside from occasional community skating days at WesBanco Arena or temporary ones set up during winter events.