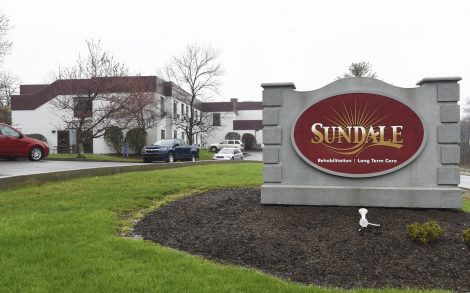 FILE - In this March 25, 2020, file photo, a Sundale nursing home sign sits on the property in Morgantown, W.Va., where several people have tested positive for the coronavirus. Nursing homes across the country went into lockdown this month with mandatory measures to protect their frail, elderly residents from coronavirus, but an alarming wave of deadly outbreaks nearly every day since suggests the steps that included a ban on visits and daily health screenings of staffers either came too late or were not rigorous enough. (Ron Rittenhouse/Dominion Post via AP, File)

CHARLESTON (AP) — West Virginia nursing homes could run out of masks, gloves and medical gowns in as soon as two weeks amid a nationwide shortage caused by the coronavirus pandemic, a trade group leader said Friday.

Marty Wright, CEO of the West Virginia Health Care Association, said the supply of personal protective equipment is dwindling as facilities rush to buy gear in a crowded marketplace marred by skyrocketing markups and delayed shipments.

“What they’re seeing are shortages nationwide that are creeping into West Virginia,” Wright told The Associated Press in a phone interview. “The supply is not able to meet the demand.”

He said he’s heard stories of masks that were less than $1 now going for $5, facilities being supplemented by homemade items and nursing homes reaching out to overseas vendors as stateside suppliers are swamped.

The West Virginia Health Care Association, the state’s largest trade group of nursing homes and assisted living centers, put out a statement Friday calling for more equipment for the facilities and other health care providers.

States across the country are scrambling to get supplies as a federal stockpile of safety equipment has been drained after it was only able to fulfill just a sliver of states’ requests. Records released by The U.S House Committee on Oversight and Reform last week showed massive gaps in what West Virginia requested and obtained from the federal government.

Republican Gov. Jim Justice on Friday acknowledged that supplies are limited but said the state’s National Guard and health department will try to help the nursing homes.

West Virginia officials are working to buy up gear from vendors from many different states, and not all of the orders have been fulfilled, Lawrence Messina, a spokesman for State Emergency Operations Center, said in a statement Thursday.

At least three West Virginia nursing homes have reported virus cases. The Sundale Nursing Home in Morgantown, which has been called ” ground zero “ for the virus in West Virginia, has reported two deaths and around 30 cases. In the state capital of Charleston, local health officials said the Eastbrook Center has eight cases and Brookdale Charleston Gardens had one resident infected.

State health officials said at least 574 people have tested positive for the virus as of Friday, with five deaths. Testing remains limited and state health officials have admitted their count lags behind the actual total as results pour in from counties around the state.

Justice has repeatedly warned of the virus spreading among the elderly and at nursing homes. He previously ordered a state of emergency, directed all nonessential businesses to close, shuttered schools until at least April 30 and rescheduled the primary election from May 12 to June 9.

The governor on Friday added Cabell, Wayne, Wood and Ohio counties to a list of virus hot spots subject to stronger safety precautions. Local officials there have been directed to establish maximum occupancy rules for stores and limit gatherings to five people. Berkeley, Jefferson, Morgan, Harrison, Monongalia, Marion and Kanawha counties have previously been included in those restrictions.

He also announced the state will give $100,000 grants to all counties to give frontline workers “heroes pay,” as well as $500 bonuses to National Guard personnel responding to the virus.

For most people, the new coronavirus causes mild or moderate symptoms, such as fever and cough that clear up in two to three weeks, and the overwhelming majority of people recover. But people with severe cases can need respirators to survive, and with infections spreading exponentially, many hospitals are bracing for coming waves of patients.

CLEVELAND — OxyContin maker Purdue Pharma is expected to file for bankruptcy after settlement talks over the ...

Editor, News-Register: For too long, employers have been able to violate the National Labor Relations Act without ... 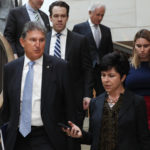 NEW MARTINSVILLE — A Wetzel County man, his son and daughter died Friday in a vehicle accident in Monongalia ...

CHARLESTON — A proposed amendment to West Virginia’s Constitution limiting how taxpayer funds can be used for ...