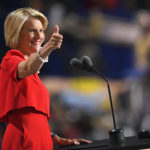 WHEELING — Sen. Shelley Moore Capito, R-W.Va., told a nationwide audience Tuesday night Hillary Clinton knows as much about coal miners in West Virginia as she does “about secure emails.”

West Virginia’s freshman senator addressed delegates at the Republican National Convention in Cleveland during a coveted primetime spot on Tuesday’s schedule. She spoke of the challenges to West Virginia’s economy as the Obama administration has imposed regulations to reduce carbon emissions, forcing the closure of many coal-fired power plants.

She also told the crowd these policies would continue if Clinton, the presumptive Democratic nominee for president, is elected.

“I weep for the fabric of my state,” Capito said. “These men and women take pride in their highly skilled and good-paying jobs that provide for their families and support their communities. They work tirelessly to power America. These people are the backbone of our country, and Hillary Clinton is promising to put them out of work?

“We shouldn’t be surprised by this, because Hillary Clinton understands coal miners and blue-collar workers about as well as she understands secured email.”

The theme of the night was “Make America Work Again,” and West Virginia was at center stage — literally. The state’s 34-member delegation is seated close to speaker’s podium, and many of them wore miner’s hats.

Capito did not focus on Trump in her speech, but on Clinton and how her policies would further harm the coal industry and West Virginia.

“What I find most troubling is that Hillary Clinton fails to recognize how her calculated policies affect real people — those who want to feed their families, own homes, pay for college, pursue the American dream. These goals should not, and cannot, fall out of reach,” Capito said.

One of the reasons this election is so important is the Democrats expect to nominate a candidate for president “that Americans overwhelmingly distrust,” according to Capito, who added Clinton has “squandered America’s trust.”

“No one who has lost the trust of the American people should ever serve as president,” Capito said. “The only thing we can trust Hillary to do is to double-down on the same failed Obama policies that are hurting Americans.