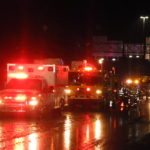 TRIADELPHIA – Around 9:30 p.m. Thursday, two members of Congress, Sen. Marco Rubio and Rep. Joe Heck, stopped along Interstate 70 near The Highlands after seeing the wreckage of the four-vehicle accident that claimed the life of 62-year-year-old Bernard Bachmann of Washington, Pa.

Earlier in the evening, the Republican lawmakers attended an event at Undo’s West in St. Clairsville. Rubio, a former presidential candidate from Florida, is seeking re-election to the Senate, while Heck of Nevada is seeking to replace outgoing Senate Minority Leader Harry Reid, D-Nev.

According to Heck’s website, he is a physician who earned his medical degree from the Philadelphia College of Osteopathic Medicine in 1988. Information from the Rubio campaign states Rubio and Heck pulled off the road upon seeing the accident and assisted the victims as best they could until emergency responders arrived

“Jeanette (Rubio) and I send our prayers and condolences to the family of the individual who tragically lost their life in Thursday night’s accident in West Virginia. I want to thank all of the first responders who arrived quickly and did their jobs with swift professionalism. Please join me in praying for all those affected,” Rubio said.

“Lisa (Heck) and I want to join the Rubios in offering prayers and condolences to those grieving and wish a speedy recovery to the injured. As always, we have great respect for the first responders who handle such cases every day,” Heck added.

“We just vastly appreciate the help,” Ohio County Sheriff Pat Butler said of Rubio and Heck stopping to assist at the accident.

Butler said a tractor trailer driven by Richie Samuel, 44, of Brooklyn, N.Y., hydroplaned on the wet roadway, causing it to cross the median and strike three vehicles. Bachmann died at the scene.

The road was closed until 1:30 a.m. Friday while the Wheeling Police Department’s accident reconstruction team investigated. No other serious injuries were reported.

The West Virginia Department of Transportation also is investigating.

In this year’s Republican presidential primary, only eventual party nominee Donald Trump and Sen. Ted Cruz, R-Texas, earned more delegates than Rubio. He ultimately withdrew from the presidential race to seek re-election to the Senate this year, as he faces Democrat challenger Patrick Murphy.