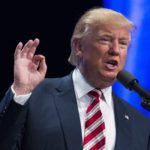 PITTSBURGH–Republican presidential candidate Donald Trump on Thursday told hundreds of oil and natural gas industry leaders Democratic nominee Hillary Clinton is waging a “war on energy” that will cost the nation trillions of dollars and millions of jobs.

While a few hundred anti-Trump protesters clashed with police outside the David L. Lawrence Convention Center in downtown Pittsburgh, the New York billionaire blasted Clinton’s policies on energy, immigration, trade and other matters during the Shale Insight conference. Conference organizers said they invited Clinton to participate, but the former secretary of state declined due to a scheduling conflict.

“Hillary Clinton’s war on energy will cost our economy $5 trillion, at least,” Trump said. “It’s going to be worse under her than it’s been under President (Barack) Obama. We need an American-first energy plan. And it’s going to be, from now on, America first.”

Clinton has never taken a firm position on hydraulic fracturing, commonly known as fracking, but Trump accused her of plotting against the practice.

“Her plan will help only her wealthy donors and global special interests who benefit from the rigged system,” Trump said of Clinton.

Trump said the U.S. shale boom — particularly in Ohio, West Virginia and Pennsylvania — is potentially worth as much as $50 trillion in the coming years. However, he said the oil and natural gas industry faces burdensome regulations from both the Environmental Protection Agency and the Federal Energy Regulatory Commission.

“The permitting process in your industry is a disaster — it’s a disaster,” Trump said.

Trump also said he would overturn the Clean Power Plan, which endeavors to reduce carbon dioxide emissions from power plants by 32 percent, compared to 2005 levels. Officials in the coal industry claim this regulation makes it nearly impossible for them to remain competitive with natural gas and renewable forms of energy.

Trump also emphasized his opposition to the Trans-Pacific Partnership, a new international trade agreement that Obama favors. The nations that would join the U.S. in the deal would be Vietnam, Mexico, Chile, Canada, Japan, Peru, Malaysia, Australia, Brunei, Singapore and New Zealand.

The Upper Ohio Valley was once a manufacturing powerhouse, with plants such as Wheeling-Pittsburgh Steel, Weirton Steel, Ormet, Imperial Glass, Fostoria Glass and other factories employing thousands of workers who earned middle-class incomes. Most of these jobs have steadily left the region during the last four decades, while Trump believes “bad trade deals” exacerbated the decline in these jobs.

Trump claimed the combination of his plans to reduce regulations, cut taxes and renegotiate trade deals would create 25 million new jobs during the next decade.

“You’d better get everybody out to vote, folks, or you can sort of forget it,” he told the audience.

The Republican nominee also addressed the ongoing social unrest in America, with the latest example being the violence taking place in Charlotte, N.C. this week, which stemmed from a police officer killing a black man.

“America desperately needs unity,” he said. “We do have a wounded country. Our country looks bad to the world. How can we lead when we can’t even control our cities?”

Trump also claims enforcing the nation’s border with Mexico is a key provision to solving a range of problems, including the illegal drug trade.

“I will stop the drugs from flowing into our country and poisoning our youth and many other people,” he said.