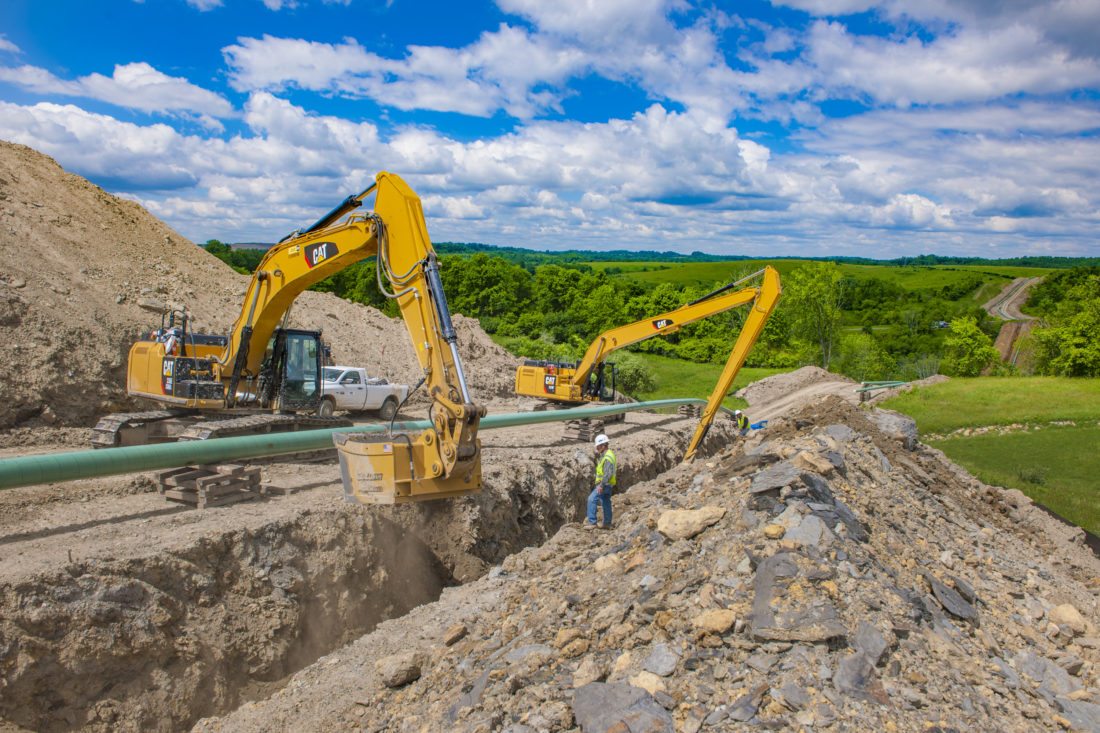 Photo Provided As contractors continue building pipelines to transport natural gas and liquids drawn from the Marcellus and Utica shales, some of the ethane is crossing Pennsylvania via pipeline to depart for Europe.

WHEELING — So plentiful is the Marcellus and Utica shale ethane supply that more than 7 million gallons of the liquid recently arrived for processing at the Ineos Grangemouth site in Scotland.

Even as Upper Ohio Valley officials remain hopeful that Thailand-based PTT Global Chemical will build a giant petrochemical complex at Dilles Bottom — and as pipelines also send ethane to Canada and to the Gulf Coast for refining — ethane drawn from Pennsylvania, West Virginia and Ohio is now being processed on the other side of the Atlantic Ocean.

The ethane flowed from the Marcellus and Utica production zone to the refinery at Marcus Hook, Pa. via the Sunoco Logistics Mariner East 1 pipeline. The docking of the Ineos Insight trans-Atlantic vessel marked the first time U.S. shale gas arrived in the United Kingdom.

“I am pleased to say the Ineos Insight has now docked. This is a game changer for British manufacturing,” company Chairman Jim Ratcliffe said. “Its arrival guarantees the security of thousands of jobs in Scotland and could spark a shale gas revolution.”

Ineos officials believe this ethane will provide British industry with the chance to benefit from U.S. shale gas economics, which is already helping to revitalize manufacturing in the U.S.

Sunoco is now working on the Mariner East 2 pipeline, which the company plans to have carry additional ethane, propane, butane and other natural gas liquids through Pennsylvania by next year. The company estimates the total cost of its Mariner East project at $3 billion.

Sunoco maps show the Mariner lines will transport products refined at the Williams Energy Oak Grove plant and the Blue Racer Natrium facility in Marshall County, as well as the MarkWest Energy and M3 Midstream sites in Harrison County.

Simultaneously, Kinder Morgan is working on the $500 million Utopia Pipeline, which would send the ethane from MarkWest’s Harrison County fractionator, onward across Ohio to a connection with existing company infrastructure in Michigan.

The ethane would then go onward to Corunna, Ontario, Canada for processing by NOVA Chemicals Corp.

These pipeline projects are in addition to the ATEX Express pipeline that actively sends Marcellus and Utica ethane to the Gulf Coast, as well as Sunoco’s Mariner West project that already ships the material to the Nova facility in Canada. Because there is still no ethane cracker in the Marcellus and Utica region, producers continue looking for additional outlets for the natural gas liquid.

Meanwhile, officials with PTT continue evaluating the potential for building the ethane cracker on about 500 acres of property along the Ohio River in the Dilles Bottom area of Belmont County. The company is spending $100 million for engineering and design work.

Officials with Royal Dutch Shell have committed to building a multi-billion-dollar ethane cracker along the Ohio River in Beaver County, Pa. However, the majority of industry leaders believe there is a bounty of ethane capable of supporting more than one ethane cracker in the Marcellus and Utica shale region, in addition to filling the aforementioned pipelines.