DYLAN McKENZIE For The Intelligencer 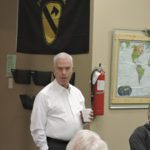 Johnson passed out plates of food, poured coffee, and spoke with the veterans in attendance at the event. Johnson has pledged to serve 100 hours of volunteer time with veterans in 2016.

The office serves breakfast to veterans every Wednesday at 8:30 a.m., said Cindy Maupin, executive director, who instituted the program several months ago. The program started out as just coffee, then expanded to biscuits, gravy, and fruit, with a hot meal being served once a month.

“We like to get the veterans together to talk and do a little outreach,” Maupin said, adding the program is open to any veteran, providing a nice environment to sit back with some hot coffee and chat with staff and other veterans.

Mick Zingo, president of the Veterans Service Commission, said he hopes the breakfast will help them in reaching out to veterans who might need help with some issues.

“We are always trying to get some of our younger veterans to come in,” Zingo said. “Some of them may have benefits that they are entitled to and that they don’t even know about.”

After they had finished eating, Johnson spoke to the veterans. Johnson, a 26-year veteran of the Air Force, said it was “good to be here and speaking with people who have the same language as I do.”

During his speech, Johnson emphasized that people need to see themselves and others as “Americans first and foremost,” rather than dividing themselves by economic status, religion, political affiliation or any other lines. After a brief time speaking, Johnson opened the floor to the attendees, inviting them to speak about any issues that they might have. One of the issues brought up was VA health care, which Johnson agreed was flawed and needs “torn down from the top down and built back up from the bottom.”

Johnson will be back at the Belmont County VSO on Nov. 7 to help judge the Veterans Week soup cookoff.