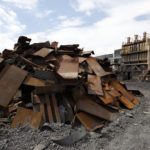 In this Thursday, Sept. 8, 2016, photo, a pile of rubble lies next to a dust collector for a carbon storage room of the former Ormet plant, at the site in Hannibal, Ohio.

WHEELING — CEOs who lead companies with a combined $6 trillion in annual revenues believe the Trans-Pacific Partnership would help West Virginia businesses grow, but members of the state’s congressional delegation oppose the controversial deal.

Proponents, including President Barack Obama, say the agreement would help open new markets for American-made products. Members of the Washington, D.C.-based Business Roundtable organization believe Congress should pass the TPP before the end of this year.

“By approving TPP this year, Congress will enable American workers, businesses and farmers to sell more in international markets — reaping the benefits before our foreign competitors do,” said Tom Linebarger, chairman and CEO of Cummins Inc., as well as chairman of the Business Roundtable.

However, Sen. Joe Manchin, D-W.Va., Sen. Shelley Moore Capito, R-W.Va., and Rep. David McKinley, R-W.Va., remain extremely skeptical of the agreement, as they believe it will not protect American jobs.

“I oppose the deal because it is not good for West Virginia workers. Currently, five of the countries in the TPP trade agreement have a minimum wage of less than a dollar or no minimum wage at all,” Manchin said Monday.

“West Virginians, no matter how talented they are, can’t be expected to compete against workers in countries where the minimum wage is so low. I will never support a trade deal unless it guarantees these agreements won’t cripple our manufacturing sector and leave thousands of hard-working Americans without jobs.”

However, the roundtable believes trade with the 11 foreign nations that would participate in TPP supports more than 71,600 West Virginia jobs.

The nations that would join the U.S. in the deal would be Vietnam, Mexico, Chile, Canada, Japan, Peru, Malaysia, Australia, Brunei, Singapore and New Zealand.

Tyler London is the site director of West Virginia operations for the Dow Chemical Co. in Charleston.

“Today, we employ more than 500 West Virginians who help manufacture materials that form the building blocks for a variety of home and personal care products, as well as pharmaceuticals, industrial coatings and other specialty fluids,” he said.

“While America has relatively low barriers to entry for foreign businesses looking to sell their goods to Americans, other countries continue to have high tariffs and other barriers that make it costly and difficult to sell U.S. products abroad.”

However, McKinley joins Manchin and Capito in opposition to the measure.

“There’s no way I’m going to support it. It ain’t going to happen,” he said.