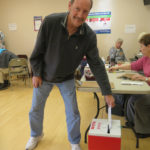 Photo by Joselyn King Tom Parill of Martins Ferry deposits his ballot during early voting Oct. 31 at the Belmont County Board of Elections in St. Clairsville.

WHEELING — Every vote counts in an election, a fact U.S. Rep. David B. McKinley knows firsthand.

Republican candidates seeking office on today’s general election ballot in Ohio County convened Monday in the concourse at WesBanco Arena, where they looked to lock up last-minute support on the eve of the election.

McKinley, R-W.Va., won a race for the West Virginia House of Delegates in 1982 by just two votes.

“Tomorrow we have to make sure we get out and vote,” McKinley told the group of about 75 that was present. “Don’t lose faith in what is happening. I’m an engineer, and I like to play with numbers, and I see some real potential here … .”

But he said inconsistent poll numbers in the presidential race are leaving him perplexed, especially in the state of Ohio. He said it comes down to which voters turn out  today, and ultimately how they cast their ballots.

“We have to make sure — not only here in the Northern Panhandle, but we have to help them out over in Ohio, too,” he said. “The real key to is Ohio, how we do in Ohio.”

“I feel we need to get Jim Justice in as governor — he’s for working families,” said Alesia Brogdon of Weirton. “He is not for taking money out of the pocket of families, and he is a friend of labor. I have a voice, and I want it to be heard.”

Many of the signs carried outside the GOP rally stated, “Remember in November,” a Democratic call to oust Republicans in today’s elections.

“The Democrats have to get out and vote for the good Democrat candidates,” said George Fahey, co-chairman of the Ohio County Democrat Party. “If they sit back, they will have no one to blame but themselves.”

Capito spoke in support of Cole, the GOP nominee for governor.

“He is an incredibly courageous and smart business person who knows that West Virginia is at a turning point,” she said. “Now is the time we need to seize the opportunity to get somebody to do the job, who is going to work full-time at the job, and who has the courage to be a leader.”

Prior to the rally, Cole said he has visited all 55 counties in West Virginia, and found the state to be “much more diverse” than he ever would have thought.

“I’ve lived here all my life, and I know there are plenty of opportunities in this state,” he said. “I also have always known how wonderful the people are. But my single greatest takeaway from this election is that I now have a greater appreciation for who we are as a state, and I want the state to prosper.”