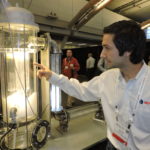 Meanwhile, Lisa Kavanaugh traveled from Oberlin, Ohio to join an anti-fossil fuel protest in the street outside.

“They say pipelines are great and that we need them, but they don’t respect property owners,” Kavanaugh said. “I have a grandson. I don’t want to leave him with a mess.”

However, Armstrong and other industry leaders said their work is essential to meet global energy demands, while they do their best to protect the environment.

“We’ve got an administration that is supportive of our business,” Armstrong said of Trump. “That is not going to change the opposition we face at the local level.”

Tulsa, Okla.-based Williams operates billions of dollars worth of infrastructure among three natural gas processing plants in Marshall County: the fractionator along W.Va. 2 south of Moundsville, the Oak Grove facility that features the enormous “superload” de-ethanizer machines that tied up traffic a couple of times in 2014, and the large Fort Beeler site along U.S. 250 between Moundsville and Cameron.

As CEO, Armstrong said his main concern is the seemingly endless infrastructure issue throughout the Marcellus and Utica shale region.

“We have tremendous exposure and focus in this area,” he said. “What we’re really uncomfortable with is if this area is going to be able to keep up with the demand we’re seeing. We need to make sure that people who struggle to pay their energy bills know what pipelines do for them.”

Recently, staff members at the Federal Energy Regulatory Commission granted preliminary approval for construction of the Nexus Pipeline and Atlantic Coast Pipeline to transport natural gas out of the region, while officials also approved the Leach XPress. The Rover Pipeline, the Mountain Valley Pipeline and Mountaineer XPress remain under review, however.

Robert Huffman is director of business development for Spectra Energy, one of the companies building the Nexus. He said the goal is to have the project, which will send natural gas northwest from Harrison County to the Detroit area, operational before the end of the year.

Greg Haas, director of oil and gas research for Stratas Advisors, discussed the viability of ethane crackers in the region. As the Upper Ohio Valley awaits a final decision by PTT Global Chemical America on its proposed project at Dilles Bottom, Royal Dutch Shell is working to build a similar facility in Monaca, Pa. He said drillers hope to get more value from their ethane than they do by simply blending it back into the commercial natural gas stream.

“We are going to see more ethane pulled out,” he said. “Ethane has a five-fold advantage over (naphthalene) in the manufacture of ethylene.”

The PTT plant would “crack” ethane into ethylene, which is eventually transformed into plastic.

“These pipelines are running through our backyards, but we don’t even know what this stuff is,” Kavanaugh said.