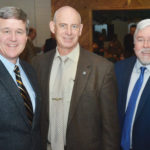 WHEELING — Several Republican lawmakers representing the Northern Panhandle said they were disappointed in the budget proposed by outgoing West Virginia Gov. Earl Ray Tomblin, which uses about $270 million in tax increases to help close a projected $400 million gap between revenue and spending.

The additional revenue under Tomblin’s plan would come by increasing the state sales tax from 6 percent to 7 percent and by removing the sales tax exemption on telecommunications. His proposal, made during his farewell address this week in Charleston, stands in stark contrast with statements made by Gov.-elect Jim Justice that he plans to submit a budget proposal with no tax increases.

State Sen. Ryan Ferns, R-Ohio, who takes over as majority leader this year, called Tomblin’s budget proposal “more of the same” during a reception at Generations Restaurant & Pub in Wheeling Friday.

“A lot of it was the same taxes he proposed last year. … It was sort of disappointing,” Ferns said of Tomblin’s plan. “I think the only way we’re going to get out of this budget hole is to completely overhaul our tax base.”

Ferns said his goal is to broaden West Virginia’s tax base, making it possible to lower the overall rates paid. It’s one of the reasons he said the Legislature decided to make the Joint Select Committee on Tax Reform a regular committee that will serve during the session, which begins Feb. 8.

“To me, the top priority should be reducing and/or eliminating the income tax. … That’s something that’s very realistic if we broaden the tax base, even given the budget hole we’re in,” Ferns said.

Delegate Erikka Storch, R-Ohio, believes Tomblin forgot about West Virginia’s “border counties” such as the Northern Panhandle in crafting his budget proposal. She pointed out many communities — including Wheeling, Weirton, Moundsville and Follansbee — have imposed or are in the process of imposing, their own 1-percent sales taxes.

“That would make the city of Wheeling tax 8 percent,” Storch said of increasing the state sales tax to 7 percent, “which would render all our businesses non-competitive with Ohio and Pennsylvania.”

Storch said she’s been encouraged by Justice’s statements regarding a budget without tax increases.

“I think there are better ways we can find savings within the budget,” she said.

Delegate Mark Zatezalo, R-Hancock, said he’s optimistic the GOP-controlled Legislature will be able to work with Justice on the budget.

“Certainly, we’ve compromised with the governor in the past on taxes. I understand their position, and I compromised,” Zatezalo said. “But I think it’s time to dig deep into the departments” to find savings.

Friday’s reception was organized by the Republican Majority Inaugural Committee. Similar events were held in the past week in Shepherdstown and Morgantown, with others planned in Parkersburg today and in Charleston Sunday.

Also in attendance, in addition to local lawmakers and supporters, were Attorney General Patrick Morrisey, Secretary of State-elect Mac Warner and Commissioner of Agriculture-elect Kent Leonhardt.

Warner, who is retired from the U.S. Army and recently worked as a State Department contractor in Afghanistan, said he wants to use his experience from around the globe to improve government in West Virginia. His plans include working more closely with county clerks around the state to ensure voter rolls are up to date.

“You can expect — and hold us accountable — to make the changes you elected us to make,” Warner said.

Morrisey, whose office has filed numerous lawsuits challenging U.S. Environmental Protection Agency regulations during President Barack Obama’s administration, hopes that a Donald Trump presidency will put a permanent end to regulations such as the Clean Power Plan and Waters of the United States rule he says hurt West Virginia.

Regarding the state’s budget deficit, Morrisey said he wants to work with lawmakers to identify fraud and waste in government — particularly in the state’s Medicaid program.

“If the Legislature lets me loose, we will go after that, and there will be no new taxes in the state of West Virginia,” he said.

In 2014, West Virginians elected a Republican majority in the Legislature for the first time since 1930. And last year, voters elected a GOP majority to the state’s Board of Public Works — which includes the governor, secretary of state, auditor, treasurer, attorney general, commissioner of agriculture and state superintendent of schools — for the first time in almost a century, according to state Republican Party Chairman Conrad Lucas.

“What a great time it is to be a Republican in the state of West Virginia. … This was the year where the people stood up … and realized it’s OK to be a conservative,” Lucas said.

In addition to gains the party has made in the Legislature and statewide offices, Lucas said the gap between registered Republican and Democratic voters — 44.6 percent for Democrats to 31.5 percent for the GOP — is smaller than it’s been in quite some time.

“We’re closing the gap,” he said. “Things are getting stronger for us.”