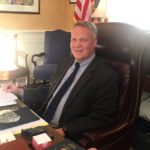 CHARLESTON — The Republican leaders of the West Virginia Senate and House of Delegates bemoaned Gov. Jim Justice’s plan to balance the general fund budget through $450 million in tax increases instead of honoring campaign promises to “right-size” government.

That’s because they’re disappointed Justice presented what Carmichael calls a $4.8 billion “spending spree” that doesn’t include expected harsh cuts to the executive branch.

“Not only is the budget not cut, but the budget has increased by over $390 million,” he said, noting that some of Justice’s spending in his proposed fiscal year 2018 budget includes $105 million for a new “Save Our State Fund,” money set aside for economic development and infrastructure investment.

Carmichael said Justice hasn’t yet released the details of that fund, and why it’s necessary.

“It’s a relatively simple problem the governor is dealing with” — balancing a budget with an estimated $500 million deficit, Carmichael said. He said the solution should be found in necessary cutbacks while funding essential services. The solution is not raising taxes, he said.

Rather than delivering an anticipated, transformative plan for the state’s financial future, Carmichael said Justice instead “turned back to the past — the worn-out approach in increasing taxes on West Virginians.”

“West Virginians cannot bear an additional tax burden,” he said, noting the state needs to reduce the size of government and reform its tax structure.

That means West Virginia’s current income tax structure should be changed to focus on consumption and service taxes, like other states such as Tennessee, Florida, Texas and Alaska and four other states have done, Carmichael said.

Justice has proposed a transition from income tax, as well.

“The mood now is very much disappointment,” said House Speaker Tim Armstead, R-Kanawha, describing Justice’s proposed budget as “new government at the expense of the taxpayers.”

However, that disappointment hasn’t manifested itself in partisanship, Armstead said. They’ll continue working together to resolve the budget deficit, he pledged.

The House and Senate “will proceed with our own work on this budget,” Armstead said, noting Justice said in his State of the State speech that he’ll consider alternatives.

“We’ll be coming forward in the next few weeks with additional cuts. … We will perform our role in this process,” he said.

That means they’ll bring state agency heads before the finance committees to suggest cuts that can be made, Armstead said.

Justice has already provided two general revenue fund cuts that are similar to what Armstead and Carmichael are aiming for: the $369,000 cut by Justice’s Vehicle Purchase Reduction program, and the $3.7 million cut that would end the state’s eight regional education service agencies.

RESA is an example of “where we have a mid-level bureaucratic level that has become an entity all unto themselves,” Armstead said, noting that he agrees with Justice’s proposal to eliminate them.

RESAs provide services such as bus driver training and collective purchasing to public schools and cost the state more than $3.5 million per year to operate.

Also in the state’s government are duplications that could be cut. Those are cases in which the state is duplicating what the private sector is doing, or there are duplications among state agencies themselves, Armstead said.

So far, the vehicle reduction program has called-back a number of vehicles from the state’s fleet. And the fleet will shrink further.

“We want to focus on the basics,” he said. “First, there must be a tax structure that encourages economic growth … and regulatory reforms to attract businesses here.”