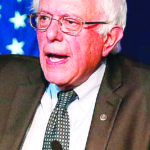 WELCH, W.Va. (AP) — Following a Town Hall meeting in one of West Virginia’s poorest counties U.S. Sen. Bernie Sanders said Sunday that the Senate can defeat the House Republican proposal to replace the Affordable Care Act with a version he said would provide enormous tax breaks to the wealthiest Americans.

The former Democratic presidential candidate from Vermont received a standing ovation immediately from about 250 people in a high school auditorium in McDowell County, and his call for universal health care as a right for all Americans was greeted with loud applause.

The Republican proposal to replace the Affordable Care Act, which added health care coverage to 20 million people, would throw five to 10 million people off coverage including thousands of West Virginians, Sanders said.

At the same time, it would provide an estimated $275 billion in tax breaks for the wealthiest 2 percent of Americans over a decade, he said.

“Instead of giving tax breaks to billionaires, I think we need to ask them to pay their fair share,” Sanders said.

The Republican-controlled Congress doesn’t want any scrutiny or hearings on the House proposal, which the American Medical Association, American Hospital Association and AARP all oppose, he said.

He told The Associated Press afterward that West Virginia’s Democratic Sen. Joe Manchin will join the vote against the substitute, adding they need Republican Sen. Shelley Moore Capito, who has raised concerns about the House plan’s effect on expanded Medicaid, which her state has, to join them.

“She can be the key vote,” he said. “I think what we’ve got to do now is defeat it in the Senate and then sit down and determine how we improve the Affordable Care Act and not simply repeal it and make it worse.”

The meeting hosted by MSNBC to examine the needs of rural America will be broadcast Monday evening.

Dr. Lori Tucker, an obstetrician and gynecologist, said 75 percent of her patients now are on Medicaid. She has seen many pregnant women with drug issues and said her profession deserves a lot of the blame for the widespread problem.

Phil Lucion, a miner currently working, acknowledged that the industry has been in a long-term decline since the 1970s and 1980s. But he said it’s not going away, adding that there’s an ongoing need for the metallurgical coal from there for making steel. But Lucion acknowledged the industry is not going to come back to what it once was.

About 50 people crowded around Sanders after the public session to greet him and talk. Several had their pictures taken with him.

He won the Democratic presidential primary in West Virginia despite losing overall to Hillary Clinton. Republican President Trump was elected with nearly 69 percent of the vote in the general election over Clinton.

After the session, Michael Church, who works in the coal industry and voted for Trump, said he was disappointed Sanders didn’t take questions from the audience and spent so much time talking about the Affordable Care Act, which is still in effect, instead of other economic issues plaguing the region. It needs to diversify with other industries, he said.

Church also said that universal health care is good in theory. The question is cost and who’s going to pay for it, he said.