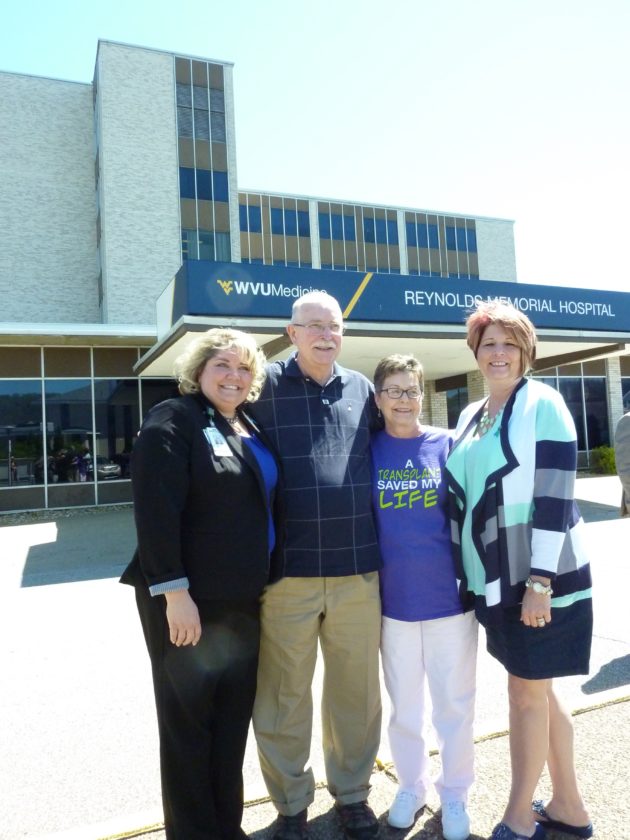 GLEN DALE — Two area women — a transplant recipient and a living donor — speak from different perspectives but share a core belief in the importance of organ donation.

They told their stories at a National Donate Life Month program held at West Virginia University Medicine Reynolds Memorial Hospital recently. During the event, a representative of the Center for Organ Recovery & Education presented a Donate Life flag to the hospital.

Mindy Leasure, 66, of Middlebourne said she got a second chance at life on Dec. 29, 2015, when she received a double lung transplant at UPMC in Pittsburgh. The surgery ended “eight long years of continuous oxygen” therapy for treatment of chronic obstructive pulmonary disease.

“COPD no longer has me in its grasp. I am no longer tethered to oxygen tanks,” said Leasure, who was released from the hospital on Feb. 3, 2016. “I cannot explain the freedom my donor has given me.”

Upon receiving a call that donor lungs were available, she said, “I was not nervous. I was not scared. I was ready.”

Roseann Teramana of Wheeling was equally determined to donate a kidney to her husband, Russ, 53, when he was diagnosed with Stage 4 kidney failure in December 2015. She said, “I never once gave it a second thought to donate to my husband.”

His illness was discovered in a routine checkup. Initially, he refused his wife’s offer to be a donor, but he relented after learning that the chance of success was better with a living donor. She underwent testing last April and was deemed to be a suitable match two months later.

“It’s an amazing, amazing gift you give to someone,” Teramana said. She became a CORE volunteer to educate the public about organ donation.

Diabetes and high blood pressure contributed to Russ Teramana’s kidney failure. After the transplant, his blood pressure dropped into the low range and his diabetes was brought under control, his wife said.

Kevin Britt, chief operating officer at WVU Medicine Reynolds, said more than 119,000 people nationally are waiting for a transplant, with a new name added to the transplant list every 10 minutes. One donor can save up to eight lives and help more than 75 people, he said.

Brooke Francis, clinical nurse analyst at WVU Medicine Reynolds, shared a story about young donor Jordan Arbogast, who was killed in a 2005 auto accident in Beallsville. Arbogast had signed a donor card as soon as he got his driver’s license.