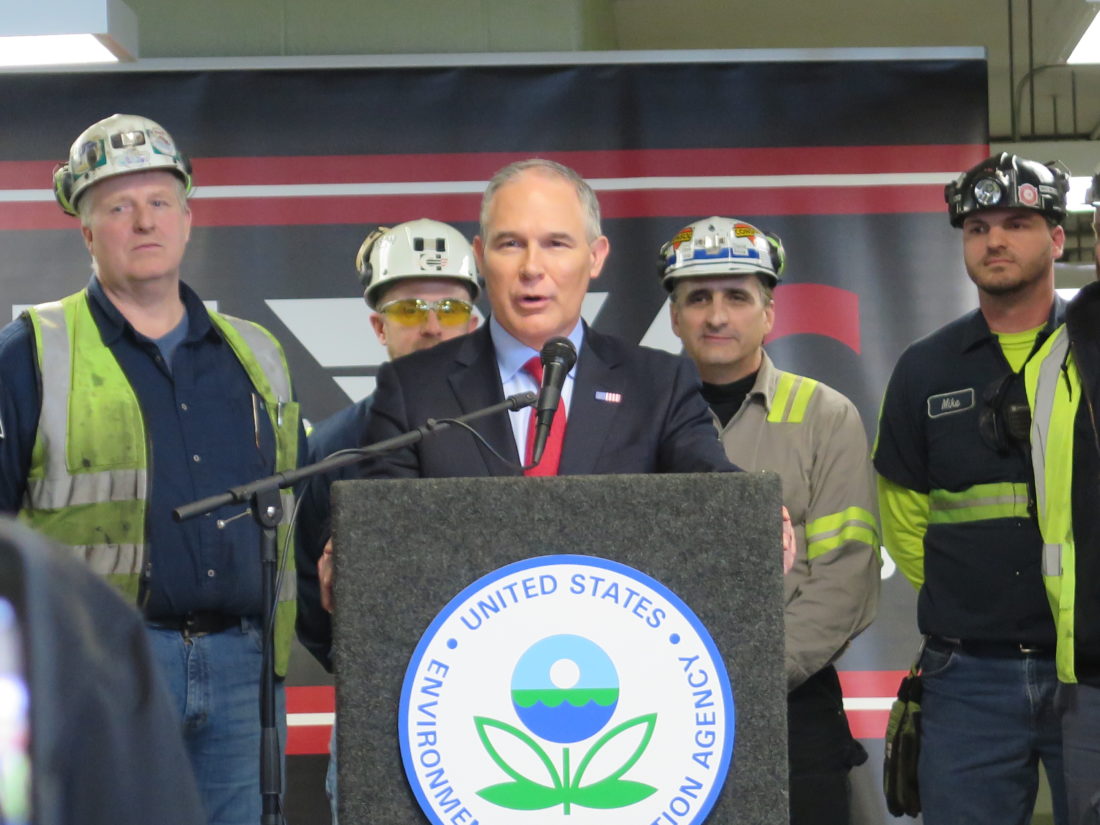 SYCAMORE, Pa. — To the delight of dozens of miners at the CNX Coal Resources Harvey Mine, Thursday, Environmental Protection Agency Administrator Scott Pruitt declared an end to the “regulatory assault” on their industry.

Pruitt, appointed by President Donald Trump to head the EPA in the post-Obama administration era, spoke briefly at the Pennsylvania mine. The Harvey Mine is now officially part of a master limited partnership, which is sponsored by the facility’s long-time owner, Consol Energy.

Pruitt’s visit came just two weeks after Trump signed an executive order intended to overturn the Clean Power Plan, which former President Barack Obama and other Democrats had hoped would sharply cut CO2 emissions from power plants. The easiest way for power producers to meet the CPP goal would be to reduce coal burning because of the mineral’s high carbon content.

“The war on coal is done,” according to Pruitt.

“It’s really sad over the last several years that a regulatory body of the federal government of the U.S. would declare a war on a vital part of our economy,” he said.

Pruitt said what he has witnessed across the country is that in states in where oil, natural gas and coal are produced, leaders in those states are committed to being both “pro-environment, and pro-growth.”

“We can achieve both. We will.”

Pruitt said he came to Western Pennsylvania not just to celebrate the executive order signed by Trump, but to partner with and work together with the coal industry “to achieve positive outcomes.”

He responded to those who think the EPA is now “compromising outcomes” with respect to the environment as it relaxes regulations on coal-fired power plants.

“Lets look at what the past (Obama) administration achieved,” Pruitt said. “Almost 140 million live in areas non-compliant with respect to air quality.”

Pruitt said there are 1,322 Superfund sites across the country, and still problems with the water in Flint, Mich.

“We’re going to improve the environment in this country, protect our water, protect our air, but at the same time do it the American way — grow jobs, and show the world we can achieve it,” he said.

Pruitt thanked the miners and coal executives present “for persevering.”

“The regulatory assault is over,” he said. “We’re going to partner together….”

Pruitt spoke to the miners for a few minutes before joining coal executives upstairs at the Harvey Mine for a private roundtable discussion. He was also expected to take a tour of the mine.

The Harvey Mine, and the nearby Bailey and Enlow Fork mines make up the Pennsylvania complex of CNX Coal Resources. Together, they constitute the largest underground mine in the U.S. — encompassing an area that larger than Manhattan, according to CEO Jimmy Brock

The mines collectively employ 1,500, and produce 26 million to 28 million tons of coal per year.

Brock said while everyone in the coal industry has “felt a lot of pain” over the past eight years, they always believed there would still be a need for coal.

“It’s easy to be optimistic today,” he said. “As long as we work safely and protect the environment, the future is going to be great.”

Todd McNair, assistant superintendent at the Harvey Mine, said he also sees a brighter future for the coal industry.

“The new administration is at last willing to look at us, rather than not,” he said. “That in itself is positive.”

Lee Farrell, assistant superintendent at the Bailey Mine, said he has worked in the coal industry for 42 years.

“I’ve seen the struggles,” he said. “But, I have confidence that we have the right political people in place.”