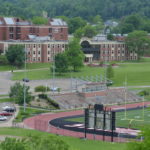 WHEELING — Wheeling Jesuit University has been purchased by the Diocese of Wheeling-Charleston to assure the future of the only Catholic university in West Virginia.

Earlier this year, WJU’s board of trustees appealed to the diocese to take action to help secure its long-term future and lower its operating costs. Specifically, the university was challenged by its long-term debt, and determined that its annual payments were more than it could sustain, according to a statement released Tuesday by the university.

The Most Rev. Michael J. Bransfield, bishop of the Diocese of Wheeling-Charleston, and the diocese responded by redeeming WJU’s bonds.

In exchange for the bond redemption, the diocese will purchase all of the university’s property, which it originally gifted to the university in 1952. No dollar figured was revealed, although university President Debra Townsley said it was a “substantial commitment.”

This action will allow the university’s administration to focus on strengthening operations and building a sustainable financial model, university officials said. The property will be leased back to the university at a nominal rate.

The diocese will have no ongoing responsibility for the university’s operation, although changes are forthcoming in the area of curriculum, Townsley said.

She said it is through the generosity of the diocese that WJU will be able to continue to offer a quality education that ensures a bright employment future for its graduates.

Townsley said the diocese’s commitment will enable WJU to modify its cost structure with the goal of achieving a balanced budget.

Officials said the university will now embark on a new strategy to reimagine, realign and renew the future of the Jesuit education that began with the support of the diocese more than 60 years ago.

“We are ever grateful for the generosity of the diocese and Bishop Bransfield to strengthen the future of Wheeling Jesuit University,” Townsley said. “It’s an exciting day. It’s not many schools that can have its debt eliminated.”

The board of trustees will remain in place, as will the Jesuit community that established the school in 1954.

She said it was the goal of the university’s founders to provide West Virginians with educations that help in obtaining jobs and boosting the economy.

Townsley said the university has just completed development of a new core curriculum including health sciences, business and technology.

As well, there is a new rehabilitation sciences category that fits in with the physical therapy curriculum.

“One of the hallmarks of a Wheeling Jesuit education is that one year after graduation, over 90 percent of students are in jobs in their profession,” Townsley said.

“We want to focus on employment. We recently hired a director of career services.”

Also developing are internship programs with local businesses, including Wheeling Hospital. Tecnocap of Glen Dale has provided scholarships for students for internships, as well.