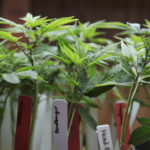 FILE - This April 15, 2017 file photo shows marijuana plants for sale at the ShowGrow dispensary a medical marijuana provider in downtown Los Angeles. This year is poised to be a big one for legalized marijuana, with California and other states that recently approved recreational pot coming online. Yet uncertainty over the Trump administration's intents toward pot enforcement has created at least partial paralysis in those states on public consumption, licensing and other issues. (AP Photo/Richard Vogel,File)

WHEELING — Medical marijuana is on its way to West Virginia, although it will be more than two years before it arrives and doctors may start prescribing it for patients.

A bill legalizing the use of medical cannibis has been signed into law by Gov. Jim Justice, but the drug won’t be available to users until July 2019. That’s when a newly created West Virginia Bureau of Health starts to issue patient identification cards to those with ailments meeting qualifications for use.

Patients will be charged $50 for the identification card, but the charge can be waived under instances of financial hardship.

The cannabis prescribed to qualifying patients won’t come in a leaf form that can be smoked or ingested. Instead, users will receive the drug in the form pills, oils, gels, creams, ointments, tinctures, liquid and non-whole plant forms for administration through vaporization.

And the final version of the medical marijuana legislation approved by the West Virginia Legislature prohibits the home cultivation of marijuana by medical cannabis users.

Under the law, the West Virginia Bureau of Public Health may issue as many as 10 permits to businesses seeking to be growers of medical marijuana; as many as 10 permits to those wishing to be processors of the cannabis; and as many as 30 dispensary permits. Medical marijuana will be considered as a medical drug by the state, and its users will not have to pay sales tax when purchasing it. There will, however, be a 10-percent tax on sales from growers/processors to dispensaries.

West Virginia is the 29th state to pass a medical marijuana law, and it joins a growing trend among states thought of as having conservative, traditional values, according to information provided by the Marijuana Policy Project.

During the past year, six states have approved medical cannabis legislation, with West Virginia and neighboring Ohio and Pennsylvania passing their measures through Republican legislatures. Arkansas, Florida, and North Dakota are the others who have new medical marijuana laws, and all six states voted for President Donald Trump last year.

Tetrahydrocannabino, commonly known as THC, is the chemical compound in marijuana found to have medicinal benefits in treating chronic pain resulting from migraines, cancer treatment or glaucoma.

It also has been prescribed for muscle spasms caused by multiple sclerosis, epilepsy and seizures, and Crohn’s disease.

Delegate Mark Zatezalo, R-Hancock, pushed in the House for passage of the medical marijuana bill. He assisted House Judiciary Committee Chairman John Shott, R-Mercer, in crafting a reworked version of the legislation first passed in the Senate.

The Shott-Zatezalo amendment offered as replacement legislation made it illegal to dispense marijuana in dry leaf or plant form to a patient, and directed that medicines from marijuana come in the form of patches, pills or potions.

The Shott-Zatezalo version of the legislation was ultimately passed by the Legislature and signed into law.

Zatezalo said he had consulted his daughter, Jennifer, a doctor at Penn State Health Milton S. Hershey Medical Center, on the matter. She confirmed medical cannabis is sometimes prescribed at the center and other hospitals for chronic pain.

“I have no reason to doubt them … ,” Zatezalo said. “But I wanted to craft a better bill. I thought the one we had was loosely written. … What we came up with gave people what they needed medically. It is a little more controlled, with the Bureau of (Public) Health having oversight. There are people out there hurting, and the evidence is mounting that it has medical value.”

Sen. Mike Maroney, R-Wetzel, a medical doctor, was among those voting against medical marijuana legislation. He did not return messages seeking comment.

“The reason I voted against it had nothing to do with my being an assistant prosecutor,” he said. “I just know it (marijuana usage) is still illegal per the federal government. I know they stopped enforcing the law during the Obama administration. … But if the federal government wanted to make it illegal again tomorrow, there would be a lot of people running afoul of the law, and a lot of legal consequences.”

Weld cited the “supremacy clause” in the U.S. Constitution which gives federal laws supremacy over those passed by states.

Questions about the law were posed to the office of West Virginia Attorney General Patrick Morrisey.

“At this time, we are reviewing the new law and any legal issues that may arise for the State of West Virginia,” said Curtis Johnson, press secretary for Morrisey.

“The feds have made it clear they will not pursue states that have legalized medical marijuana,” he said. “In fact, the recent budget in Congress did not allocate a single dollar to allow Attorney General Jeff Sessions to target those states.”