JESS MANCINI For The Intelligencer 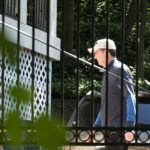 PARKERSBURG — U.S. Sen. Joe Manchin on Wednesday called for a special independent prosecutor to probe allegations of Russian tampering and collusion in the 2016 election.

President Donald Trump on Tuesday fired James B. Comey as director of the FBI, who was leading an agency investigation into whether Trump’s campaign advisers worked with the Russian government to affect the presidential election. Democrats say it reminds them of the “Saturday Night Massacre,” when President Richard Nixon fired the chief investigator into the Watergate scandal.

“I was totally shocked, surprised,” Manchin said of Comey’s firing.

Trump should have fired Comey after the election, rather than wait until now, which has caused people to question Trump’s motives, Manchin said.

“Logically, that would have been the time to do it,” Manchin said in a telephone news conference with West Virginia reporters on Wednesday afternoon.

A nonpartisan, unbiased investigation that will neither be a witch hunt nor protect the president will restore public confidence, Manchin said. A special prosecutor from the highest ranks in the FBI reporting to Congress and not the FBI or the attorney general can perform an impartial investigation without fear of termination, he said.

“That’s what has to be done,” Manchin said.

Published reports indicate Comey had requested just days before he was fired for a significant increase in resources for the investigation into Russian interference in the presidential election, using information from lawmakers, including Sen. Richard Durbin, D-Ill. A spokesman for the Justice Department said the request for more funding was false, reports indicate.

Manchin also said the health care bill passed by the House to repeal and replace the Affordable Care Act will have a disastrous impact on the elderly, Medicaid recipients and opioid treatment in West Virginia. The House approved the bill without the breakdown of the financial impact of the bill, he said.

The senator also spoke about Don Blankenship, the former Massey Energy CEO who was released Wednesday after a one-year federal prison sentence for conspiring to violate federal mine safety standards at the Upper Big Branch Mine in West Virginia where 29 miners died in 2010.

Blankenship should do the right thing and disappear from the public eye, Manchin said. He has to answer to no one except the people who lost family in the accident, Manchin said.

Blankenship is “going to have to answer to them for the rest of (his) life,” Manchin said.