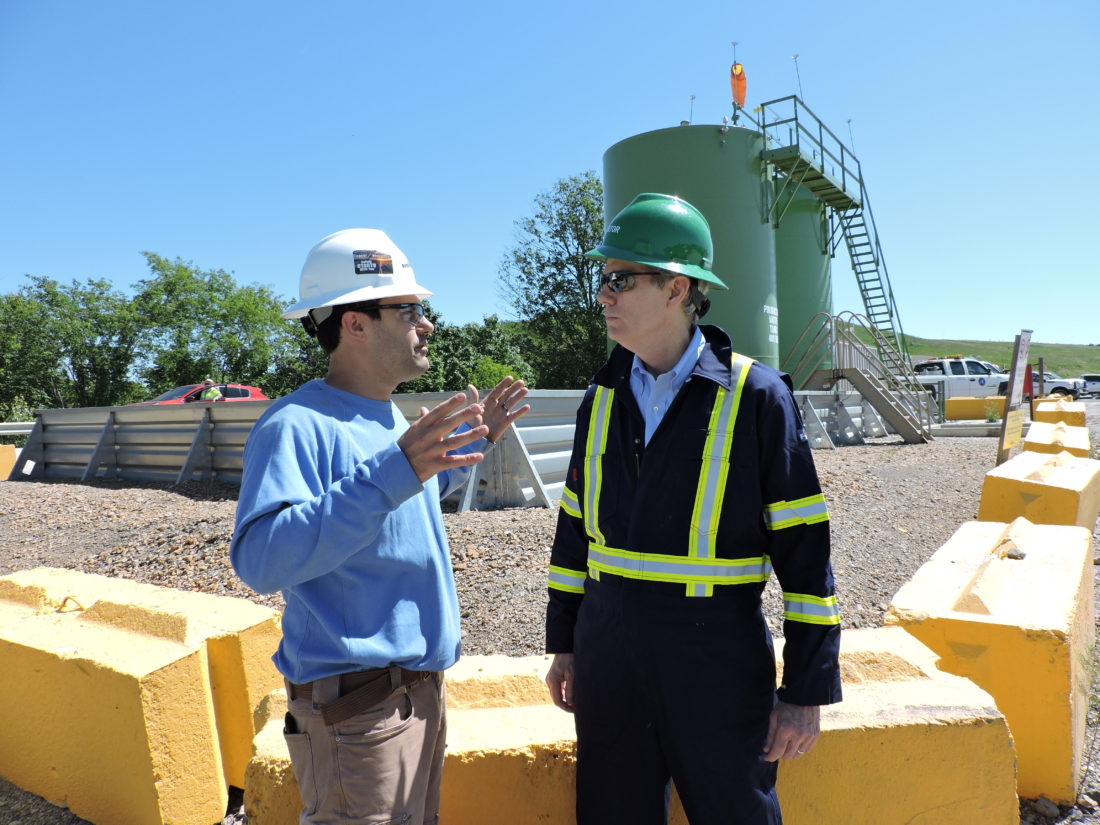 Toby Rice, president, chief operating officer and founder of Rice Energy conducted the tour and spoke about his company, which employs 520 full-time workers in Belmont County and in Washington and Greene counties in Pennsylvania. About 45,000 contractors visit Rice Energy sites each month.

“It’s great to have the senator here today. I think we do such a great job out here. I think we need help communicating the message so any time we can have a senator come out and be willing to spend time talking and learning about what we do, we appreciate it,” Rice said. “I think what he will take away from this is that we want to do the right thing — stewardship is No. 1, and you see that at Rice Energy locations, but also with other gas and oil operators.”

After touring the facility, Portman discussed what he learned about the new technology and how he believes it will impact the oil and gas industry and the overall economy.

“This well is a small footprint, but they have 13,000 feet of pipeline going out underneath us. It’s an amazing facility. This site is about a $60 million investment in Belmont County and the state. We are really happy to have that type of investment because it brings a lot of jobs with it,” Portman said. “And frankly, with prices being pretty low on natural gas, they have become more and more efficient, both in terms of the economy and with stewardship of the environment.”

Portman noted the site uses an electric drill powered by natural gas, which is much quieter and more efficient than a traditional diesel-powered drill.

“They are cutting down on the emissions and cutting down on the noise pollution. They are doing the right things,” Portman added. “That is what I’ve been encouraging all these companies to do. We want you in Ohio. We want the investment, but don’t cut any corners — follow the rules, make it safe for the workers and do it in an environmentally sound way. They are doing that here. For example, they are recycling 90 percent of the water they use.”

Portman said he will talk about what he learned at the Son Uva Digger site when he gets back to Washington, D.C. He sees natural gas production as an opportunity for Ohio as well as the entire country because it not only creates jobs, but provides a “relatively inexpensive” source of fuel that can be used to bring manufacturing and other industry back to the United States.

“Manufacturers here in Ohio are really energy-intensive. They use natural gas to power a lot of their processes. And we also want to use this to heat our homes and to be less dependent on foreign energy sources,” Portman added.

Portman said his bipartisan legislation, the Regulatory Accountability Act, if passed, will help the energy industry and job creation across the board.

“Today we talked about impediments to job creation, and one thing we talked about is regulations. … The Regulatory Accountability Act is very simple. It says there is a cost and a benefit to every regulation that must make sense, and we must have smarter regulations requiring that the federal government use the most cost-effective way to accomplish whatever the objective is,” Portman said.

Whether the objective is safety or protecting the environment, Portman said his legislation would guard against excessive paperwork and compliance costs, which he said lead to fewer jobs. The legislation passed the U.S. House of Representatives, was approved in a Senate committee, and will go to a vote on the Senate floor soon.

“It has had Democrat support every time. This is one rare instance of bipartisanship. One of my co-sponsors is Joe Manchin from West Virginia, who has been a leader on how to figure out how to have smart regulations,” Portman noted. “This will help coal, natural gas, logging and manufacturing. … We have legislation to streamline the permit process as well. That will all help to create jobs and create more investment here in this part of Ohio and this part of our country.”

Rice said worker safety, protecting the environment and helping to grow the economic base of the area are all priorities of his company. Over 90 percent of employees are hired locally from within the area in which they operate. Rice added the company’s service providers and contractors have the same percentage of local workers hired.

“One of the things that we have really dealt with in the past few years is the technology improvements we are making on the upstream side. Right now, we are fracking with a jet engine. This technology is allowing us to produce more gas at a lower cost,” Rice said. “That means supply is growing, and what we want to see is the same innovation on the downstream side to make sure demand for energy grows as supply grows — which means more industry, more jobs.”

Rice emphasized that energy is a basic need, and that his company is making it inexpensive.

“People forget that people die if they don’t have electricity. In Africa, they can’t cool their vaccines and things like that,” he said. “We are taking our excess supply and shipping it overseas and providing it at a much lower cost to them than they can get it locally. I feel like we are saving lives doing this job.”