Ethane Storage Could Bring 100,000 Jobs to the Ohio Valley 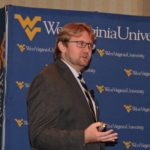 Photo by Casey Junkins Brian Anderson, director of the West Virginia University Energy Institute, speaks Tuesday during a discussion about creating a possible ethane storage hub for the Marcellus and Utica shale region.

CANONSBURG, Pa.–West Virginia University researchers believe a Marcellus and Utica shale ethane storage hub could help create $36 billion in investment and more than 100,000 permanent jobs — some of which could occur at industrial sites left behind by Wheeling-Pittsburgh Steel, Weirton Steel and Ormet Corp.

During a Tuesday conference, WVU Energy Institute Director Brian Anderson said drillers throughout the region are now producing about 460,000 barrels of ethane per day — almost three times the total amount of ethane expected to be used per day at the Royal Dutch Shell ethane cracker set for Beaver County, Pa. and the potential PTT Global Chemical cracker at Dilles Bottom, combined.

For several years, industry leaders have said one of the major hurdles to building ethane crackers in Ohio, West Virginia and Pennsylvania is a lack of storage capacity, which they said is necessary to ensure a continued supply of ethane to the plant in the case of a pipeline rupture. On Tuesday, Anderson and fellow researchers identified several areas throughout the region that feature favorable geology for such ethane storage.

All or portions of several Upper Ohio Valley counties have areas meeting the researchers’ specifications, including Hancock, Brooke, Marshall, Wetzel and Tyler in West Virginia and Jefferson, Harrison and Monroe in Ohio.

“Appalachia is poised for a renaissance of the petrochemical industry due to the availability of natural gas liquids,” Anderson said. “A critical path for this rebirth is through the development of infrastructure to support the industry. The Appalachian Storage Hub study is a first step for realizing that necessary infrastructure.”

Ethane is one of the liquid forms of natural gas prevalent in the Marcellus and Utica region. An ethane cracker transforms this material into ethylene, which eventually becomes plastic.

About 12 miles south of the proposed PTT ethane cracker, Denver-based Energy Storage Ventures hopes to begin storing ethane before the end of 2019 at Clarington. Officials said the ethane would be pumped into and out of the underground caverns through pipelines.

This portion of Monroe County is in one of the zones researchers identify as having the “top-rated” geology for ethane storage. The three criteria for an area to qualify as “top-rated” are:

∫ an underground wall of salt that is at least 100 feet thick;

∫ a wall of limestone at least 40 feet thick; or

∫ existing sandstone reservoirs that can be converted for use.

Some Marcellus and Utica shale ethane is now being shipped out of the region for cracking via pipelines such as the Sunoco Logistics Mariner East and Mariner West projects, as well as the ATEX Express.

Kinder Morgan is also building the $500 million Utopia Pipeline to send up to 75,000 barrels of ethane to Canada each day.

“Ethane, propane and butane have much more value than we are realizing,” he said.

Anderson said the process of creating more than 100,000 jobs would take several years, or even decades, to complete. He said part of this could involve public-private partnerships to redevelop former industrial sites, including former steel mills, aluminum plants, glass factories, etc.

He said some of these sites may be eligible for cleanup grants under the U.S. Environmental Protection Agency’s Superfund program.

“We have a lot of old manufacturing sites that have been left behind. The sites could be redeveloped for use and given new life,” Anderson said.

West Virginia Oil and Natural Gas Association Executive Director Anne Blankenship said having an ethane storage hub in Appalachia would benefit the market in the face of catastrophic events, including storms such as Harvey in Texas and Louisiana.

“The debilitating effects of a hurricane on the Gulf Coast point to the need for creation of another large storage hub in the U.S., geographically distant from the Gulf Coast,” she said.

The study was funded via a $100,000 grant from the Claude Worthington Benedum Foundation, along with another $100,000 from numerous drilling, fracking and processing companies.

“Recognition of the enormous opportunity for economic development based upon shale gas, including downstream modern manufacturing, was the motivation for the governors of West Virginia, Ohio, and Pennsylvania to agree to collaborate to maximize the opportunity,” Benedum Foundation President William Getty said of the October 2015 agreement.

“Being able to store valuable feedstock will help develop midstream and downstream opportunities that will make us even more competitive on a global and national basis,” he said.