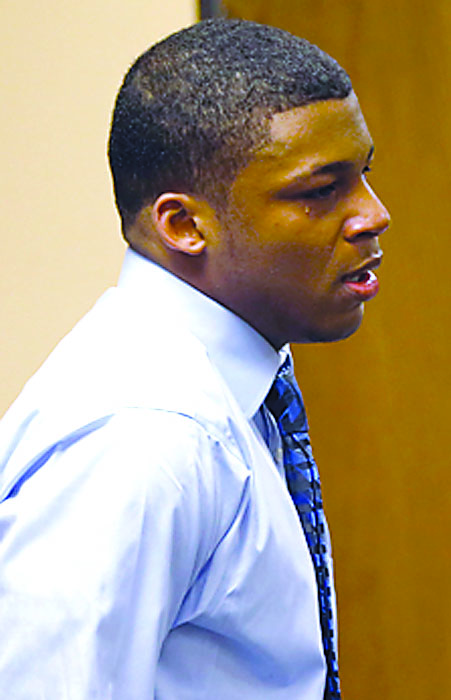 YOUNGSTOWN — Youngstown State University football player Ma’lik Richmond, convicted of raping a teen in a highly publicized case in Steubenville, is eligible to play in the Penguins game on Saturday, a judge ruled late Thursday.

Richmond, 21, of Steubenville filed a federal lawsuit against the university Wednesday after the school allowed him to join the team and then told him he could not play after a female student circulated a petition asking he be kept off the team.

The lawsuit asked that Richmond be reinstated to the team’s active roster along with attorney fees and an unspecified amount of damages.

U.S. District Court Judge Benita Pearson issued the temporary order after a lengthy court hearing Thursday evening. Another hearing is set for Sept. 28, when Richmond’s permanent status on the team could be determined.

The Ohio Attorney General’s Office submitted a scathing reply to the lawsuit on behalf of the university, arguing why Richmond’s petition for relief shouldn’t be granted. The reply said “proving no deed goes unpunished,” the school has been “hauled into court by a student that YSU has bent over backward to assist, support and provide a second chance when no one else would.”

“The rest of the world had written Plaintiff off as an unrepentant rapist, but YSU encouraged him and integrated him as ‘part of the student community,'” the reply said.

One of Richmond’s attorneys said Thursday she had just begun reading the reply.

“I am frankly shocked at what I’m starting to read,” Susan Stone told The Associated Press. “They don’t understand how they threw someone under the bus.”

Richmond served about 10 months in a juvenile lockup after he and a Steubenville High School teammate were convicted in 2013 of raping a 16-year-old girl during an alcohol-fueled party. The case brought international attention and led to allegations of a cover-up to protect the Steubenville’s storied football team.

He was released in January 2014. He attended colleges in West Virginia and Pennsylvania before transferring to Youngstown State in the fall of 2016 as a sophomore.

Richmond and his legal guardians spoke with YSU President Jim Tressel and football coach Bo Pelini about him joining the team and both were supportive, the lawsuit said. Richmond made the team as walk-on defensive end in January.

According to the lawsuit, Richmond excelled during Youngstown State’s spring game and was told by Pelini he would play this season. Pelini told the Youngstown Vindicator that he decided to allow Richmond to join the team after conducting his own investigation.

The day after the Aug. 4 article, a female student at Youngstown State began circulating a petition calling for the school to not allow Richmond to play football.

The lawsuit said that Pelini called Greg Agresta, one of Richmond’s guardians, on Aug. 9 and said there was pressure being exerted on the university’s Board of Trustees. Pelini told Agresta that Tressel proposed that Richmond become a practice player and wait until next season to play.

The lawsuit says Agresta was told by Pelini that Ma’lik probably would be a starter at some point.

Youngstown State subsequently issued a statement in a university-wide email saying the school takes sexual assault very seriously, and that Richmond would be allowed to continue practicing with the team but would lose a year of eligibility.

Richmond quit the team after learning of the email.

Bruzzese, who survived, was overseeing a wrongful death lawsuit that Richmond filed against a housing authority following the death of his mother and a great-nephew in a 2015 house fire. Authorities haven’t identified a motive, but say one theory is that Richmond mistakenly believed Bruzzese had dismissed the lawsuit.