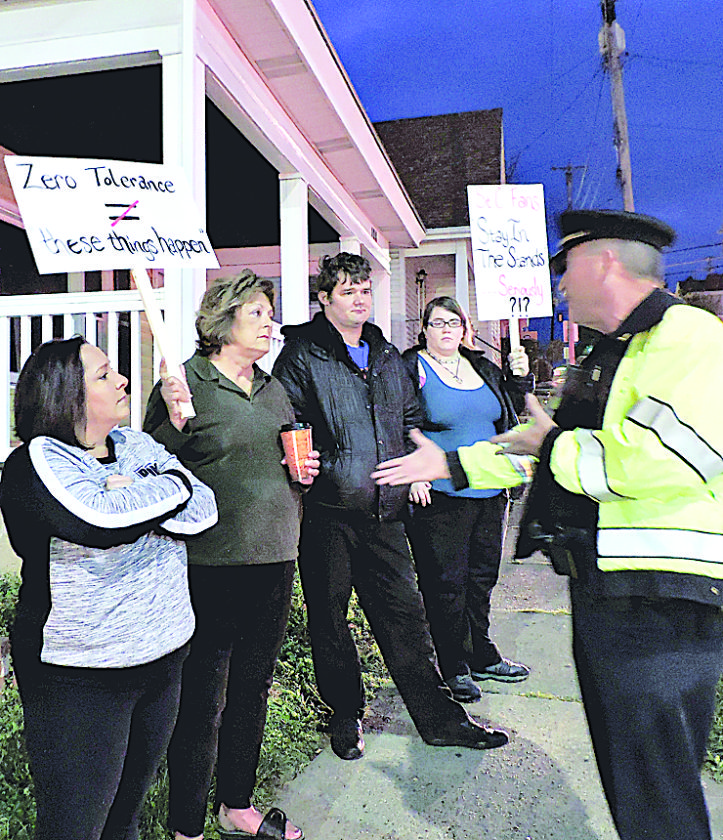 ST. CLAIRSVILLE — While holding signs stating “I won’t be quiet,” “No excuses for victim blaming,” “Protect our children” and more, a group of about 15 protesters gathered outside of St. Clairsville High School on Monday morning.

The protest was related to the alleged assault of a fifth-grade student during a football game on Oct. 13. St. Clairsville police have investigated the allegation and turned the evidence over to the Belmont County Prosecutor’s Office.

Although the mother of the victim considers what happened to her daughter to be a sexual assault, Belmont County Prosecutor Dan Fry said Monday that “a simple assault charge has been filed in juvenile court.”

“The charge is assault. It is not charged as a sexual assault, as there was nothing presented to my office for review indicating anything except a simple assault,” Fry said. “The allegation that the victim was knocked to the ground is the sole basis of the filed charge. … The report indicates that the pulling down of the pants occurred.

“The charge we have filed is based only on the allegation that the victim was initially thrown to the ground. Based on the report we received, which I believe to be comprehensive and complete, including multiple statements, I don’t anticipate additional charges.”

The accused student received a five-day in-school suspension from the school district.

The alleged victim, along with her mother, grandmother, grandfather and siblings, attended the protest that began about 6:45 a.m. Monday as parents were driving their children to the school, along with those traveling via school bus.

St. Clairsville Police Chief Jeff Henry asked the protesters, who were split into two groups flanking Sugar Street, to make sure they stayed on the sidewalk for safety’s sake.

Henry spoke briefly to a few of the protesters, telling them he did not know exactly why they were there. The girl’s grandmother explained why they were upset.

“People in authority, grown men and women, should protect children, not revictimize them. Telling a child that you should stay in the stands because then that wouldn’t have happened is ridiculous. Any place you go you should feel safe — that goes for a football game or the principal’s office,” the grandmother said during the course of the peaceful protest, which lasted about an hour.

Another protester, Tiffany Scott, said she participated because she is concerned about the future. She noted her own daughter heard about what happened and is concerned for her own safety.

“My daughter came to me crying because she is scared to go to the fifth grade. She is scared something is going to happen to her and no one is going to protect her,” Scott said. “It’s really bad that I can’t tell my daughter anything but that if it does happen, you know I will be there. We will take action, we will get justice.”

Protester Rosie Johnson said she hopes the school district will set up an educational program to teach students that bullying and harassment are wrong.

“I feel our children love our teachers. We all know they aren’t here for the money, they are here for the job, and kids listen to them. I feel that if we would set up a program about bullying and instill in them when they are younger not to do these things, so when they come into these grades they know right from wrong,” she said.

Johnson believes such a program could include guest speakers. She also thinks if a child does commit such an infraction they should have counseling paid for by the parent. “People are mean and all we can do is make our kids better and teach them not to be mean. … What happened did not fit the punishment. It should have been a little bit harsher, and definitely something set up to get the child help,” Johnson said.