A Piece of Railroad History Uncovered in Wheeling 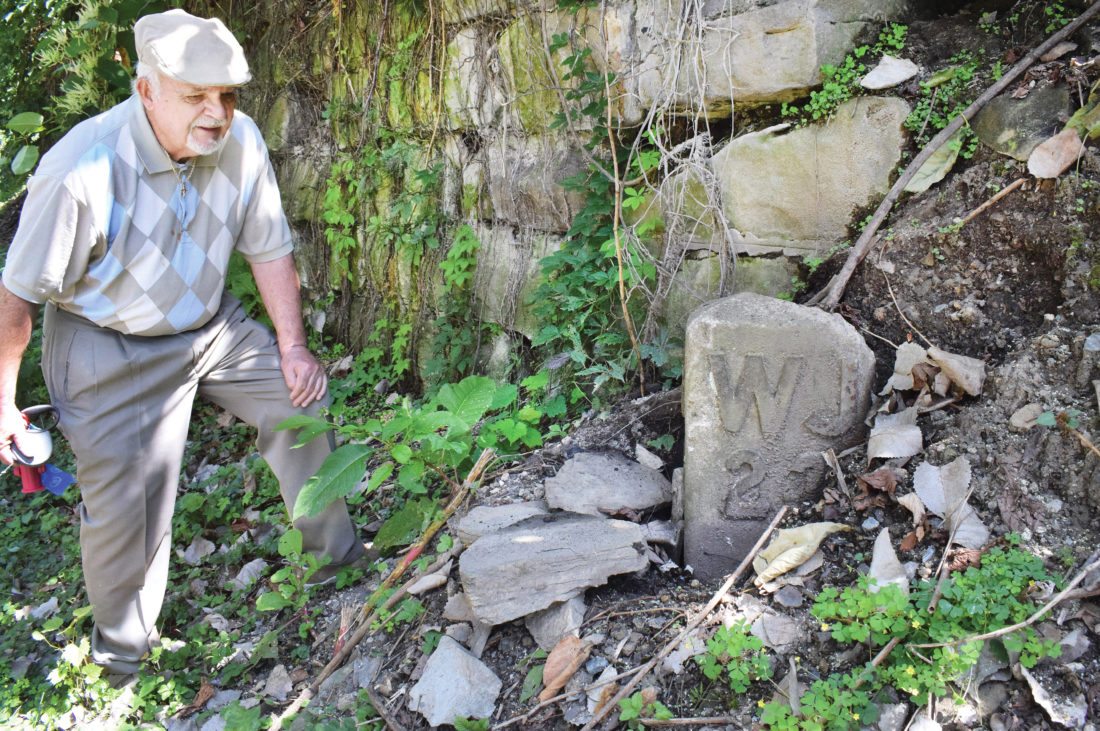 WHEELING — It has been years since the rumble of trains sounded through Wheeling’s landscape, chugging alongside the rolling Ohio River.

Long gone are the rails that many rode to and from far-away destinations or walked along in leaner times. The coal trains of yesterday have been replaced with smooth-sailing, coal-laden barges along the river.

The extinction of the rail tracks through Wheeling gave rise to a new era of walking, jogging, running on what today is known as Wheeling Heritage Trail. The trail follows the old train paths from Elm Grove west to downtown, south to Benwood and north to Pike Island Locks and Dam.

Wheeling resident Robert “Bob” Lally recently uncovered a piece of that railroad history and made sure others would see it from now on. Lally, who resides in North Wheeling, often enjoys leisurely strolls along the trail outside his door. It was on a midsummer walk that he discovered a concrete marker among the weeds on the hillside, not far from the Hope 6 housing complex.

Lally, who once worked in the railyard in Benwood among other occupations, said the concrete post bears the number “23” and the letters “WJ.” But the marker, resembling a hitching post, was nearly buried in rocks and weeds.

Lally asked if these strong almost-Marines could help uncover the concrete marker by removing the growth around it. The recruits agreed and returned days later and began digging and cutting back the overgrown weeds and dirt that held the marker hostage.

Lally also consulted with Wheeling Operations Superintendent Tim Birch to get the OK to work on the trail, and for landscaping once the marker was uncovered.

“When I saw that thing, I knew it could look nice if landscaped. I’ve asked several people if they knew what it stands for. Some think it’s a junction marker, others think it’s a mile marker.”

The marker is now plainly visable along the east side of the trail about 30 yards north of the steps leading to Hope 6.

MacCoy said the group of young men and women he is training are “poolees,” which means they are in the delayed entry program for the Marine Corps. They have already passed the required physical and other requirements, and are serving inactive duty time until they head out to boot camp.

“These are men and women who have made the commitment to go to recruit training (and) serve their country as U.S. Marines. They work with me on a weekly basis to prepare for the rigors of recruit training. We use the trail for running, pull-ups and running the steps at the port,” MacCoy said. “When Mr. Lally asked for their help, they came back on their own time to do it.”

The recruits said compared to the training — which includes simulated re-supply runs while carrying heavy water jugs and other supplies — the work to uncover the rail marker was a piece of cake.