U.S. Ethane Will Go to China 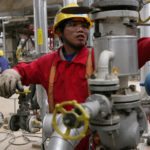 An employee works at a Royal Dutch Shell petrochemical plant in China. Patrick Ford, executive director of the Business Development Corp. of the Northern Panhandle, said a similar plant could come to the Weirton area.

WHEELING — At the same time President Donald Trump witnessed the signing of West Virginia’s $83.7 billion deal with China Energy for petrochemical plants in the Mountain State, he also witnessed another deal to export 2.6 million metric tons of ethane per year to China.

“Based on the data I have, there should be plenty of ethane here for multiple crackers,” Ford said. “To me, these investments in our area are very secure.”

After learning that China Energy plans to invest $83.7 billion for ethane crackers, power plants and related infrastructure in West Virginia, Ford quickly identified the former Weirton Steel Corp. property along the Ohio River as a prime location for such as facility. Other potential sites in Brooke and Hancock counties include the former Wheeling Corrugating plant at Beech Bottom and the area just south of Mountaineer Casino, Racetrack and Resort.

According to the U.S. Energy Information Administration, the nation’s ethane production should reach 1.7 million barrels per day in 2018. This is an increase of 450,000 barrels per day compared to 2016 yields.

Any ethane cracker would take ethane produced from Marcellus and Utica shale wells to “crack” the liquid into ethylene. After further processing, this material can be used to make anything from plastic bags to antifreeze.

Officials estimate building a massive ethane cracker would generate thousands of construction jobs, as well as hundreds of permanent jobs once the plant enters operation. Hundreds or even thousands of jobs related to the cracker could also result from each such plant, officials have said.

“The volume of ethane drawn from the shale gas is very prolific. We are very confident there will be enough for multiple cracker plants in this region,” Ford said.

In addition to the regional crackers, these pipelines now ship ethane out of the Marcellus and Utica shale region for processing elsewhere:

– the Sunoco Logistics Mariner East pipeline, which sends ethane to the East Coast; and

Now, federal officials expect enough of the natural gas liquid to allow American Ethane Co. to export about 2.6 million tons of ethane per year from the Gulf Coast to a new cracker in China that the Nanshan Group will build.

“American Ethane is greatly honored to receive this invitation by President Donald Trump and President Xi Jinping. This deal will create thousands of jobs in our countries and American Ethane will also invest in infrastructure in China,” company CEO John Houghtaling said.