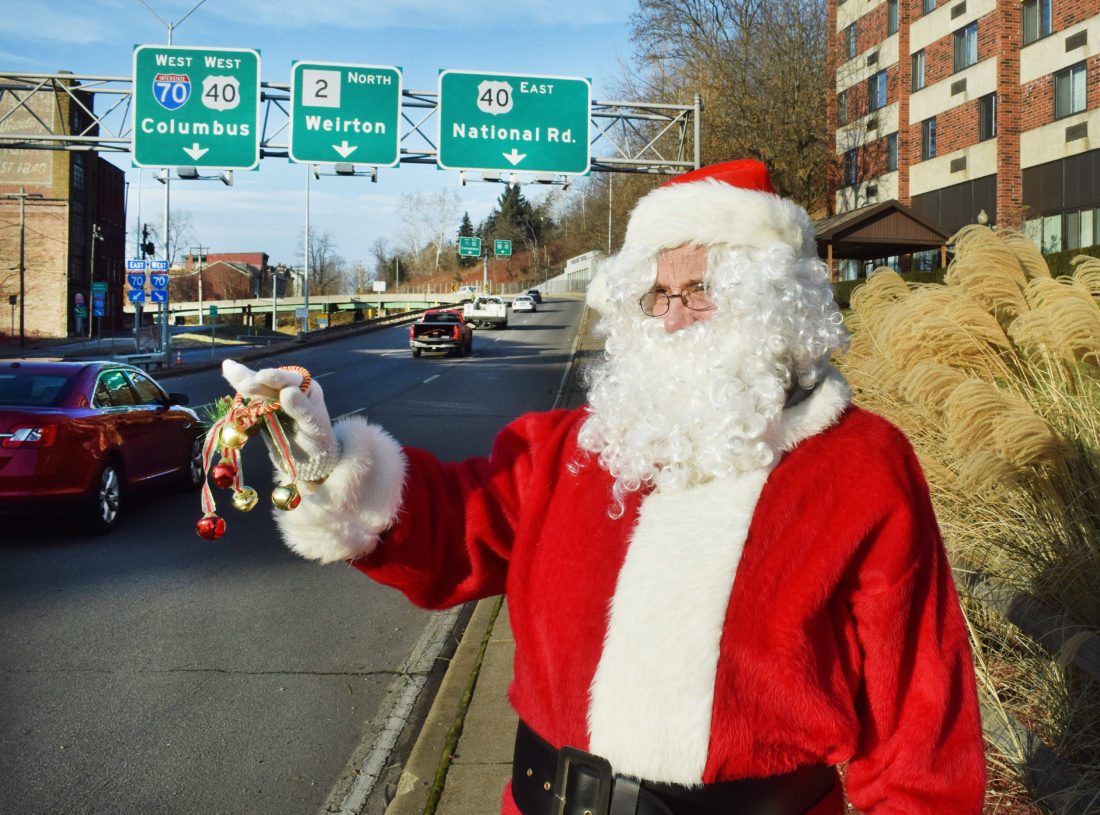 Photo by Scott McCloskey Bobby Briggs waves to passing motorists in his Santa Claus suit near the busy intersection of 10th and Market streets in downtown Wheeling in front of Montani Towers as a way to spread holiday cheer.

WHEELING — Making Christmas a bit merrier — mostly for perfect strangers — is fast becoming a holiday tradition for a resident of a downtown Wheeling apartment complex.

This year, for the sixth year in a row, Montani Towers resident Bobby Briggs donned his bright red Santa Claus suit and marched across the street — no sleigh needed — to the busy intersection of 10th and Market streets and waved to passing motorists as a way to spread holiday cheer.

Briggs said he enjoys seeing the joyful expressions on the faces of passing drivers, especially if there are children in the car. Whether it’s a quick honk, a wave or a thumbs up, Briggs said it makes him feel good when people display their appreciation and smile.

Many drivers traveling on 10th Street with the historic Wheeling Suspension Bridge as a backdrop quickly react, perhaps taken back to those magical days as a child when they first saw Santa waving and ringing bells.

Briggs said just about everyone sounds their horns, including passing law enforcement officers.

Christmas has always been an important holiday for Briggs, and he said he wanted to give back that holiday cheer in some way to the local community. He decided a few years back to start dressing up as Santa each Christmas season and wave to folks driving past Montani Towers.

He said he typically begins his role as Santa the week before Christmas and he will stand up to five hours at a stretch in the days leading up to Christmas Eve.

Briggs said people really enjoys sharing the Christmas spirit, as there have been times when people pulled to the side of the road briefly to hand him Christmas cookies or a card. Although he relishes their efforts of appreciation, Briggs said he really just enjoys doing it mostly for the children.