Operation up and running after clearing hurdles 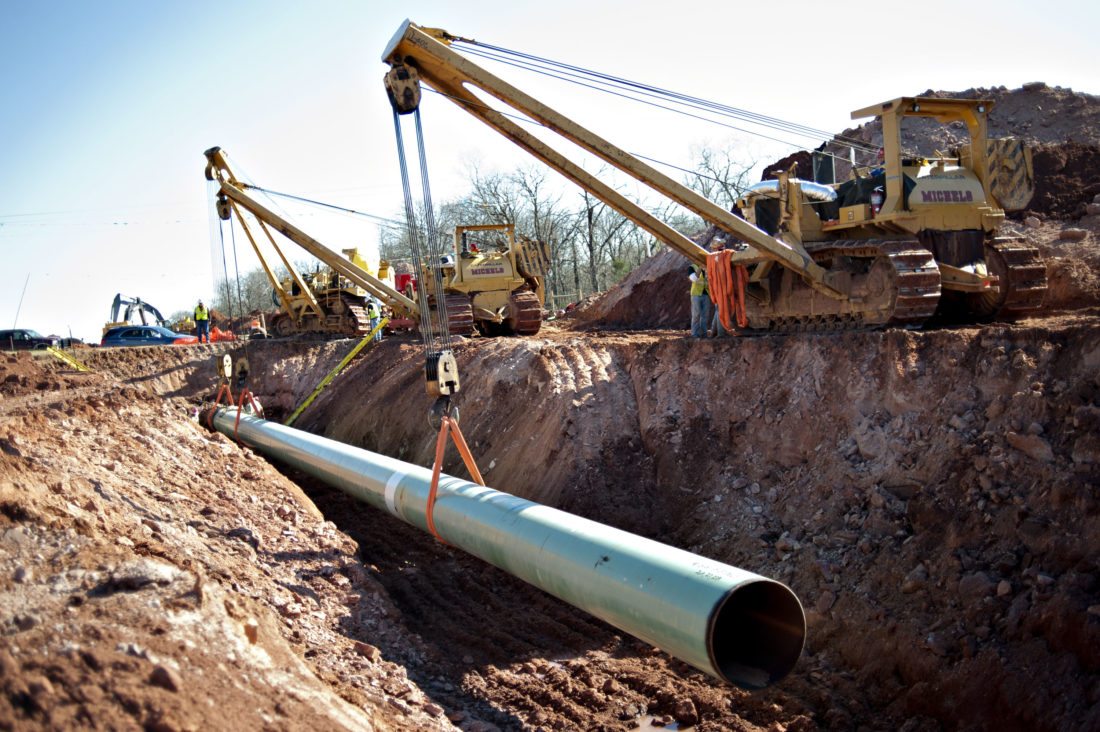 A sixty-foot section of pipe is lowered into a trench during construction of the Gulf Coast Project pipeline in Prague, Oklahoma, U.S., on Monday, March 11, 2013. The Gulf Coast Project, a 485-mile crude oil pipeline being constructed by TransCanada Corp., is part of the Keystone XL Pipeline Project and will run from Cushing, Oklahoma to Nederland, Texas. Photographer: Daniel Acker/Bloomberg via Getty Images

WHEELING — After hundreds of eminent domain lawsuits, several route adjustments and at least $500 million worth of investments, Kinder Morgan is pumping Marcellus and Utica shale ethane from the Cadiz area to Michigan for export to Canada via the Utopia Pipeline.

Despite continuing efforts to bring a $6 billion ethane cracker to Belmont County, proposals by China Energy to build $83.7 billion worth of petrochemical projects in West Virginia and ongoing construction on the Royal Dutch Shell plant north of Pittsburgh, there is still no end-user for ethane in the Marcellus and Utica region.

“The project team, in coordination with local, state and federal agencies, has done a tremendous job developing a project that provides ethane takeaway capacity from the Utica Shale to the growing petrochemical industry, while also maintaining an open dialogue with the local communities to support their needs and consider alternatives,” Don Lindley, president of natural gas liquids for Kinder Morgan, said. “We are extremely pleased to have placed the Utopia Pipeline into service.”

The Utopia is the latest pipeline to send ethane — drawn from fracked shale wells across Ohio, West Virginia and Pennsylvania — to other regions for processing. The Utopia joins these pipelines in shipping ethane out the Marcellus and Utica area:

∫ the Sunoco Logistics Mariner East pipeline, which sends ethane to the East Coast for export to Europe; and

The 12-inch diameter Utopia conduit has a current capacity of 50,000 barrels per day, but this volume could eventually be expanded to 75,000 daily barrels.

However, according to the U.S. Energy Information Administration, the nation’s ethane production should reach 1.7 million barrels per day this year. This is an increase of 450,000 barrels per day compared to 2016 yields, so the production increase could leave plenty of ethane in place to run the proposed local petrochemcial projects.

The Utopia stretches northwest from the MarkWest Energy Harrison County facilities into Michigan. Plans call for the ethane to then be shipped across the border into Ontario, Canada for cracking by NOVA Chemicals Corp., which already receives ethane from the Mariner West line.

During the process of building the Utopia, Kinder Morgan officials filed numerous lawsuits seeking the right to use eminent domain to clear the path for the pipeline path in Ohio. Company attorneys claimed the firm could exercise eminent domain via the “common carrier” clause. This stipulation would apply if another form of natural gas or oil flowed along the same line as the ethane, so company leaders said they would leave 10 percent of the line open for this.

Along the way, the pipeline giant also agreed to move the line to avoid an organic farm near Cadiz. The farmer, Mick Luber, had feared the pipeline work would destroy the land he had worked for years to cultivate. The farm produces a variety of fruit, vegetables and flowers.

“I am still able to farm as I did. They did not go through my field,” Luber said.

However, Luber said the industry, as a whole, continues making work as an organic farmer more challenging.

“There are three active wells around me, diesel motors running at a compressor station, and multiple pipelines,” he said. “It is not like it used to be, and it doesn’t seem like it’s going to slow down.”