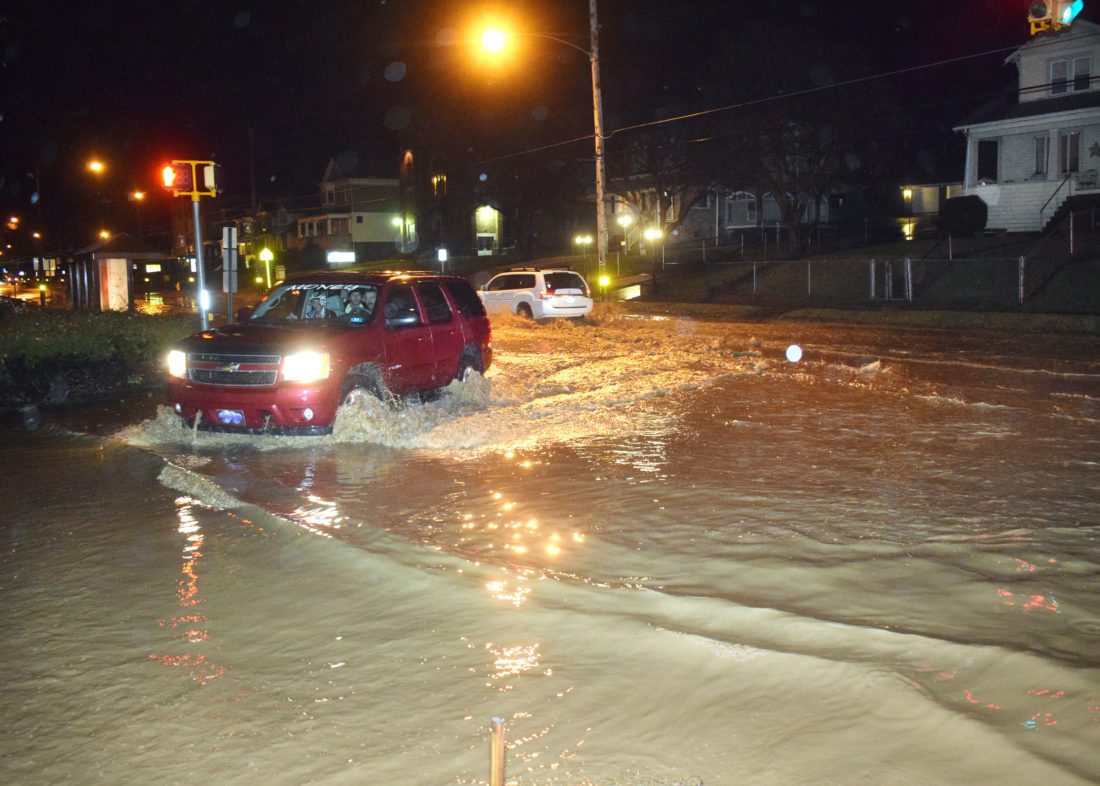 WHEELING — Emergency officials found themselves busy with area flooding in creeks, streams, and even streets in the city of Wheeling, Thursday night, while the potential for the Ohio River to overflow this weekend concerns those in both West Virginia and Ohio.

Most recent data from the National Weather Service indicates the river at Wheeling and Moundsville will crest at flood stage sometime from 3-6 p.m. Saturday.

The heaviest rains were expected Thursday night through today, and these had forced the closing of a number of Ohio County roads by 8 p.m. Thursday.

Vargo said initial reports came in that a car was in a creek near an Ohio County trailer court, and that a man and woman had tried to escape the vehicle. There were also reports throughout the evening of residents trapped in some Ohio County trailers with water rising around them.

In the end, Vargo said it turned out there was no vehicle in the creek.

Also closed Thursday night were roads such as Huff Run and Riley Hill, and National Road at Dixon’s Run. W.Va. 88 also was covered with mud and debris, according to Vargo.

In the Warwood section of Wheeling, water covered W.Va. 2 to the point officials closed it for a brief time. There were also reports of flooding and heavy fog in the area of Cherry Hill Road.

Vargo said as more rain was expected today, EMA officials would remain on duty. The heavy rain and runoff is expected to cause streams and creeks to continue to rise, and there are opportunities for flash flooding.

“We’re just waiting for the next band of rain,” Vargo said.

He asks anyone noticing creeks rising to the point of flooding to call 911 officials, so first responders can be sent to the scene to investigate.

“And if you see running water on roadways, don’t drive through it,” Vargo said.

The Ohio River at Moundsville has a flood stage of 37 feet — and 36 feet in Wheeling.

Vargo said the southern end of Wheeling Island is predicted to experience some flooding on Saturday, with water “in the parking lot at the marina, but not affecting homes” in the surrounding neighborhood.

In downtown Wheeling, he expects water to come up to the concrete areas at Heritage Port.

“We will be cautiously optimistic,” Vargo said. “Any change in the weather patterns can change these predictions to go from good to bad.”

On the other side of the river, Belmont County Emergency Management Agency official Becky Horne said flood preparations are ongoing.

“The ground is really saturated. … There is potential for flooding based on the current forecasts,” Horne said

“People are urged to keep an eye on creeks and streams and the river, of course. If it comes up people need to be ready and get to higher ground. Make sure you have a plan in place in case you have to leave your residence. Take the necessities, such as cell phone chargers and medications. Have a disaster plan for your pets, too,” Horne said.

Bridgeport Exempted Village School District employees are preparing for the rising water by removing equipment and supplies from the fieldhouse at Bill Jobko Stadium. The fieldhouse has suffered flooding in the past.

“We’ve been following the National Weather Service and it is reporting the Ohio River will crest at 36 feet, which will allow water to get into our fieldhouse,” Superintendent Zac Shutler explained. “Water usually starts getting on the football field itself at a little lower than 36 feet.”

Shutler said the students don’t have classes today, so the entire maintenance crew will be available to go down there and start loading stuff into trucks as a precautionary measure.

Horne said while Belmont County has its usual problem areas in terms of creek flooding, such as Pipe Creek, there could be flooding in many more areas of the county this time around, including toward some riverfront areas.

“People need to remember — don’t do anything dumb. Don’t ride through flooded roadways.” she added.