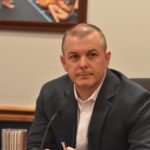 File Photo by John McCabe Ohio County Schools Assistant Superintendent Rick Jones looks on during a February 2018 board of education meeting called as the school system prepared for a planned walkout by teachers and service personnel.

These preparations come as West Virginia Attorney General Patrick Morrisey on Wednesday said the planned work stoppage is “illegal” and his office stands ready to support any state agency in enforcing the law.

“Any such action would be consistent with my duty as attorney general to uphold the rule of law and designed so as to ensure our students have access to the education they are entitled to by our state’s constitution,” Morrisey said.

“Breaking the law does not set a good example for our children.”

“Student safety is number one,” Miller said. “We are asking people not planning to work Monday to use the call-out system so that we can continually monitor who is planning to come to work, and who is not.

“We will cancel school if that is in the best interest of the students. At no time do we want students standing at a bus stop with no bus driver coming, or have children go to Wheeling Park High School without adequate supervision. We have to err on the side of safety.”

One-time school events, however, such as the state wrestling tournament set for this weekend in Huntington, will go on as planned, but bus transportation will not be provided. School events that can be rescheduled will be moved to another time, she said.

Miller said she and other administrators understand the concept of a walkout or strike by public workers is against West Virginia law.

“An injunction may occur in the near future that will force me to force employees to come to work,” she said. “I’m not sure exactly where that will go, but I’m told it will happen.”

Miller described the teachers thus far as “being respectful,” and said administrators will continue to work with them and support their efforts as they recognize teachers’ wages across West Virginia rank 48th among the 50 states.

Ames said superintendents across the state have asked the workers to at least call to say they wouldn’t be at work, so they will know whether they will have employees for school that day.

The union leaders present at the meeting indicated their membership likely would not be appeased by the pay hike, or by a freeze on Public Employee Insurance Agency rates for the next 17 months as the Legislature seeks a permanent fix.

“The safety and security of our students is top priority,” Crook said Wednesday. “Our decision to close the schools for a couple of days is based on what’s best for our kids and their well-being. If we do not have teachers and staff in the classrooms, that is definitely a safety concern.”

“If we don’t have bus drivers, meals, the whole nine yards, that’s the reason. The only time we really cancel schools is when it’s not safe to be there, and not having these people would definitely qualify as not safe.”

The closure affects all schools in Marshall County including adult education programs.

Extracurricular activities during the strike would be decided on a case-by-case basis. Tuesday evening, board president Tom Gilbert said normal events scheduled for today and Friday would be halted, though major events such as tournaments will continue. Transportation to these events are being planned, and may require parent transportation if drivers are unavailable.

The two missed days will be made up at the end of the school year — June 1 and 2. This is in addition to any other snow days the county may face.

State lawmakers late Tuesday passed a measure — signed by Gov. Jim Justice late Wednesday — that would give teachers, school employees and state police a 2 percent raise in 2019, and 1-percent raises in 2020 and 2021. The measure as amended by the Senate took away a third year in which teachers would receive a 1-percent pay hike, but gave an additional year to school employees and State Police.