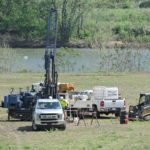 DILLES BOTTOM — To ensure the ground can support a $10 billion ethane cracker, officials are testing the soil at the former R.E. Burger plant along the Ohio River in Belmont County.

Nearly two years ago, the 854-foot-tall smoke stack at the site fell to the ground after an organized sequence of explosions. Last summer, officials with Thailand-based PTT Global Chemical paid $13 million to acquire this property.

“This is part of our ongoing feasibility and engineering work, including permit-related activities required through our contractors and consultants,” said PTT spokesman Dan Williamson.

Early this month, PTT paid another $17.5 million to acquire the Ohio-West Virginia Excavating property, which is to the south and west of the Burger site. By combining the areas, the company controls about 500 acres for possibly building the ethane cracker.

Williamson, however, said this acquisition should not be considered confirmation of a final investment decision, which he said remains under evaluation.

“I continue to feel positive about it,” he said. “The company is very open in their communication with us.”

Ethane is one of the liquid forms of natural gas prevalent in Marcellus and Utica shale wells. Any ethane cracker will take the ethane to “crack” the liquid into ethylene.

Currently, most of the ethane is pumped out of the region via pipelines such as the ATEX Express, Mariner East and Mariner West, and the Utopia. If it is not distributed through pipeline, the ethane can be burned off via flaring, or blended into the methane stream for marketing as natural gas.

Developers and public officials said the Belmont County ethane cracker would create about 6,000 construction jobs and 500 permanent jobs. However, these numbers eventually could be much more if the plant spurs an entire petrochemical industry along the Ohio River, officials said.

If the cracker and related jobs materialize, a certain number of out-of-area workers will migrate to Belmont County because they already will have some familiarity with such projects. Institutions such as West Virginia Northern Community College and Belmont College hope to train local residents to work in these fields.