Golf Course at Oglebay Park in Wheeling Has Rough Summer 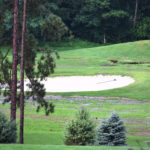 Photo by Scott McCloskey Some of the Robert Trent Jones course’s fairways have burned-out spots, but remain playable, according to a park spokeswoman.

WHEELING — The Robert Trent Jones-designed golf course at Oglebay Park’s Speidel complex may not look up to par now, but its fairways remain playable by local and visiting golfers.

Water woes and soaring temperatures have taken a toll on the Jones course, causing some temporary damage this summer.

Lindsey McGlaughlin, marketing manager at Oglebay, acknowledged that the grass appears to be burned out on some fairways, but she said the problem hasn’t halted play on the Jones course.

Oglebay’s Par 3 and Arnold Palmer courses are unaffected by the situation, according to officials.

“Unfortunately, the timing of these repairs coincided with the hottest temperatures and the driest conditions of the summer,” she said. “With the limited water supply available, Oglebay irrigated greens and tees, which still remain in good condition.

“However, Oglebay’s reduced water allowance, as a result of these repairs, did not allow for the proper irrigation of fairways.” said McGlaughlin. “As a result, the aesthetics of the Jones course were compromised. Fortunately, this issue did not affect playability, and golfers are continuing to play the course daily.”

Steps are being taken to address the issue now and in the immediate future.

Regarding the issue at the course, McGlaughlin said, “Oglebay has taken an active role by contacting guests prior to arrival. Meanwhile, the team is working to restore the fairways by conducting soil testing to gauge optimal germination. Following these tests, the team will begin seeding the fairways in an effort to restore the Jones course to its former beauty.”