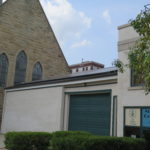 Photo by Joselyn King Solar panels have been installed atop the garage behind the First State Capitol Building in Wheeling.

WHEELING — A local effort is encouraging residents to harness the sun’s power to reduce electric bills.

It is estimated an investment of about $11,000 in solar panels now could net a homeowner $17,500 in energy savings over the next 25 years. When a 30-percent federal tax credit on the original investment equaling $3,300 is added in, the result is a profit of about $9,800 to the homeowner, according to information provided by Solar United Neighbors.

The group is working to organize the Upper Ohio Valley Solar Co-op. The co-op has 33 participants who have jointly selected Appalachian Regional Power as a vendor to provide them a bulk price on solar panels.

Those interested in having solar energy in their homes still have time to join the co-op, which is accepting new participants until Oct. 24. The co-op is open to those living in West Virginia’s Northern Panhandle, as well as those in Belmont, Jefferson and Columbiana counties in Ohio, and Washington and Greene counties in Pennsylvania.

Solar power users can expect to reduce their bill by at least one-third, and that amount can be as high as two-thirds depending on the size of the home and the system installed, according to Ben Delman, spokesman for Solar United Neighbors.

He said most solar systems for residential homes typically cost between $9,000 and $13,000, and a 30-percent federal tax credit can be applied to that amount.

“The cost varies from home to home,” Delman said. “It depends on the way the home is designed. Solar energy is meant to be customized for each person’s home, and price is dependent on how much power would like to produce from the system.”

Joining the Upper Ohio Valley Solar Co-op is free, and there is no commitment to purchasing panels. Those interested can sign up at www.solarunitedneighbors.org/westvirginia/WVUpper OhioValley.

“Go to website, and you’ll find the sign-up form for the co-op,” Delman said. “There is also a wealth of information and learning there about how the process works and anything you want to know about going solar.”

A regional information session for those interested in learning about solar energy has been set for 6 p.m. Sept. 17, at Cornerstone Ministry Center Dining Hall in Jefferson, Pennsylvania.

Delman said the co-op format is “a really great way to go solar.”

“It does give you a peace of mind,” he said. “The experts have done solar homes a dozen times. Hearing them talk is an opportunity to learn about solar and feel confident in making the right decision.”

There also is an added advantage to having solar energy, according to Delman.