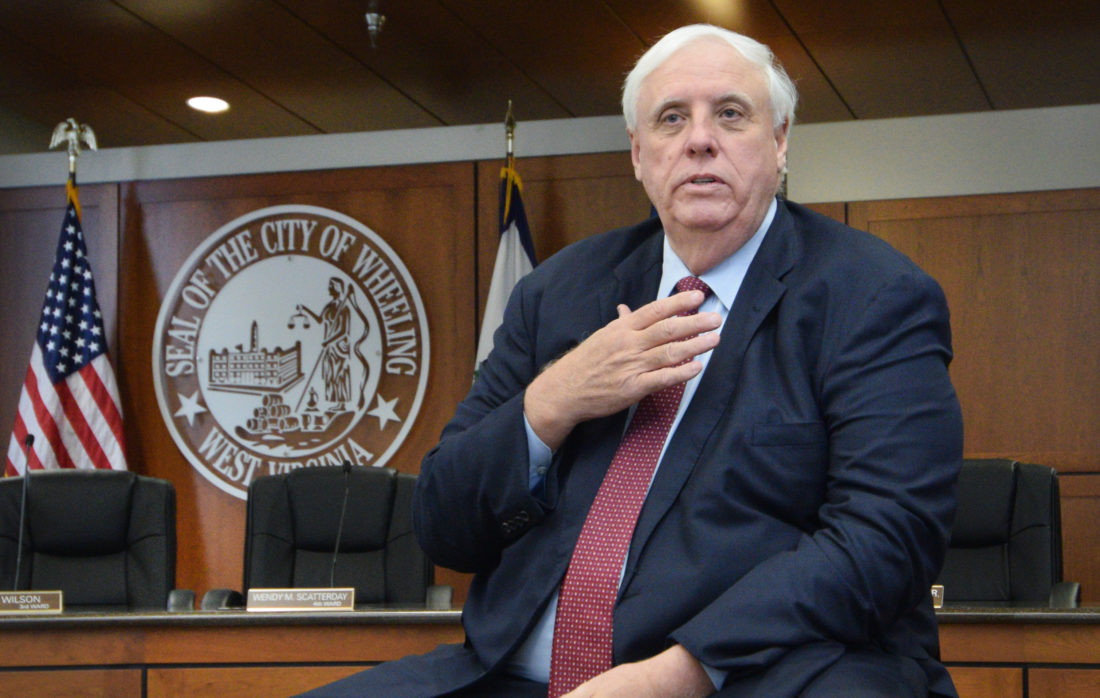 WHEELING — A visit to Wheeling last week on a snowy, winter day had West Virginia Gov. Jim Justice remembering his father, a trip he made to the Friendly City nearly 25 years ago and how a business opportunity here positively changed the course of the family’s coal business.

Justice recounted Wednesday while he was at the City-County Building his trip to Wheeling during a major snowstorm in early 1994.

He described his father, James C. Justice, as his “best friend” and the best man at his wedding. The elder Justice ran the family’s coal operations, and had gained so much respect in the coal industry that the Ohio River Barge Co. named one of its boats for him — “The James C. Justice,” Justice said. The boat was dedicated in 1970, and Justice said he saw the boat six months later on the river near Huntington but hadn’t seen it again.

James C. Justice’s health decline happened quickly in 1993, and started as he returned from a golf trip to Florida and stopped in North Carolina for a physical at Duke University Hospital. Doctors there discovered his platelet count to be low, but the bigger problem was he contracted double pneumonia there during his four-day stay.

After returning home to Lewisburg, West Virginia, he was hospitalized again for double pneumonia. He would contract an additional bacterial infection while in the hospital and die in June 1993 at the age of 68, according to Justice.

“Bad things happen to all of us,” he said. “It doesn’t matter if we are rich or poor, black or white, Democrat or Republican — they happen.”

Although Justice ran the family agricultural interests, he said he had never learned much about running the coal operations from his father. The responsibility fell to him as he inherited ownership of Bluestone Industries and Bluestone Coal Corp.

“What I knew about the coal business you could put in a thimble,” Justice said. “But we had worked side-by-side. Dad had always given me three parts to a five-part puzzle. Someway, someway we always made it through.

“Now all of a sudden he was gone, and our coal business was hemorraging and I didn’t know what to do,” he said.

“They said if you can get here today (to Wheeling), we’re going to buy our coal from you,” Justice said. “We had tried so hard to get any kid of coal market anywhere.”

But there was no way to get to Wheeling that day — except to charter a private plane from Beckley, West Virginia, and travel through inclement weather, he said.

Justice described the trip as “rough.” One runway had been cleared for their landing at the Wheeling-Ohio County Airport, and Justice said after the flight he was just thankful to be alive.

His group then began to make its way by taxi from the airport to the Wheeling-Pittsburgh Steel offices downtown.

Justice said he was gathering his thoughts, but didn’t really know what he was going to say to the steel representatives. While six months before he had had only a thimble full of knowledge about the coal business, that had turned “to a teacup full” by then, he said.

As the taxi reached the bottom on the hill from the airport and turned onto W.Va. 2, Justice looked toward the Ohio River. Out on the water was the “James C. Justice” vessel towing barges.

“We got the business that day, and everything else is just history,” Justice said. “And off we went.”