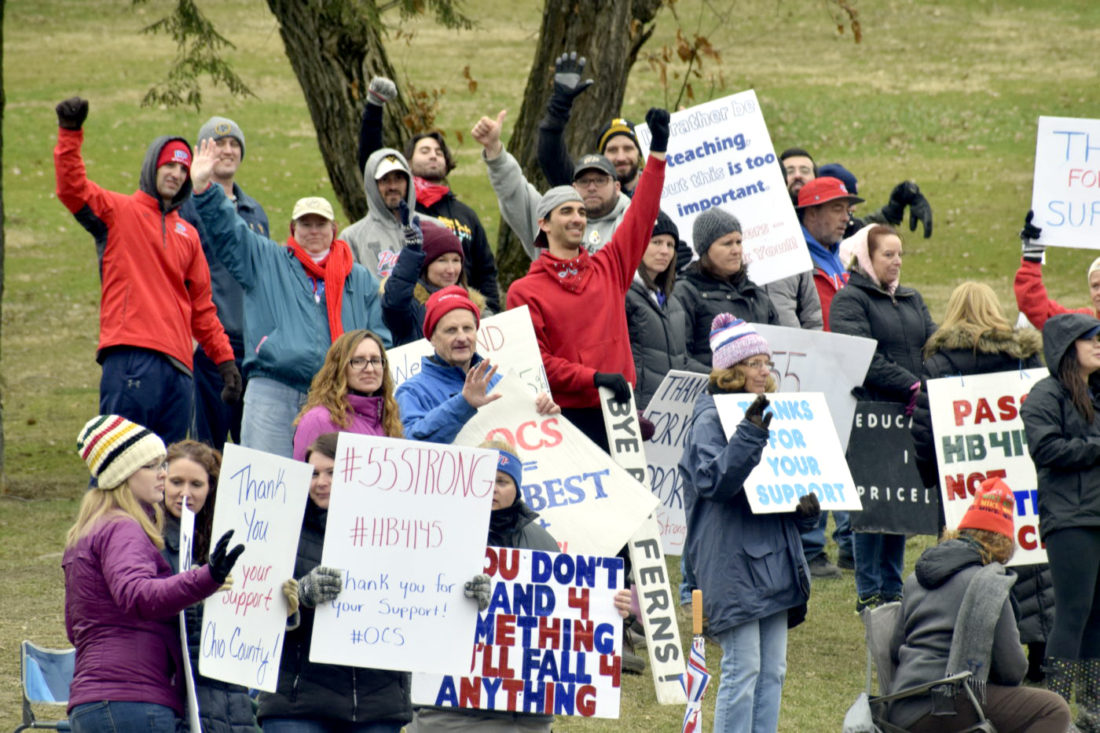 File Photo Teachers wave and give thumbs up to passing motorists this morning near the Interstate 70 exit along National Road near the entrance to Wheeling Park.

WHEELING — It took a middle school student from Wheeling to help end a nine-day teacher’s strike in early March over pay and benefits.

Public school teachers in all 55 West Virginia counties walked out of their classrooms on Feb. 22, and county school superintendents across the state came to their aid by closing school statewide for each day of the strike. In West Virginia, it’s illegal for public employees to strike, but by closing schools that became a non-issue.

Teachers and service personnel sought to bring attention to the fact they were among the lowest paid teachers in the nation, and that they were unhappy with a 2 percent raise approve by the West Virginia Legislature that also would give them 1 percent raises in 2020 and 2021.

It was on Feb. 26 — the third day of the strike — that Gov. Jim Justice came to Wheeling to meet with teachers in a town hall setting at Wheeling Park High School.

The visit became contentious as Justice told teachers from throughout the Northern Panhandle to “be smart for once.”

“I love you … but I’m not happy with you,” Justice said. “You should be appreciative of where you are.

Sitting near the front was Gideon Titus-Glover, the son of a teacher and a student at Triadelphia Middle School. He took the stage and asked the governor why the state was quick to put money into tourism, but couldn’t find money to pay its teachers more.

Justice explained to Titus-Glover the concept of investing, and how every $1 spent on tourism in West Virginia results in the state gaining $7 in tax revenue.

“But if you’re putting money into public schools and making smart people, that’s a smart investment,” Titus-Glover told the governor.

The following day, on Feb. 27, Justice announced the words from the young man in Wheeling had changed his way of thinking, and that he now saw teacher’s raises as an investment in the state’s future.

After discussions in Charleston with union representatives, Justice called for the West Virginia Legislature to approve an additional 3 percent raise for all state employees. With the 2 percent raise already approved, teachers would receive a 5 percent raise under Justice’s plan.

The House of Delegates passed legislation establishing the plan for the raises, but the Senate would not agree. Republican Senate leadership questioned whether anticipated revenue would cover the cost of the raises, and believed all state employees should have an equal raise.

Justice’s office provided data projecting that state revenues would raise this year, and would cover the raises. Many Democrats in the Legislature argued the state should raise the severance tax on gas and oil production to fund the raises.

The Senate amended Justice’s measure and instead approved a 4 percent raise for teachers on Saturday, March 3. The 1 percent reduction dropped the overall cost of the raise for state employees about $13.4 million, according to information discussed by the Senate Finance Committee.

More contention ensued as a House-Senate conference committee could not reach agreement when the Legislature reconvened on Monday, March 4.

But on the morning of March 5, Senate leadership recanted. They explained they saw no other option but to approve the 5 percent raise, then cut state spending by $20 million.

Legislation giving a 5 percent raise not just to teachers and school personnel, but also law enforcement officers and all state employees, unanimously passed both the Senate and the House that afternoon. Justice immediately signed the bill into law, and students returned to the classroom on May 7.

Justice also called for the establishment of the Task Force on Public Employees Insurance Agency Stability, given the charge of finding ways to make PEIA more cost efficient. The task force last met on Dec. 10, and its work will continue in 2019.

The actions by West Virginia’s teachers led to similar actions by educators in other states including Arizona and, most recently, Oklahoma.