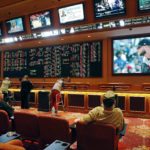 FILE – In this May 14, 2018, file photo, people make bets in the sports book at the South Point hotel and casino in Las Vegas. A top New Jersey lawmaker, Democratic state Senate President Steve Sweeney, urged all 50 states on Wednesday, May 23, 2018, to reject "integrity fee" payments to professional sports leagues in any sports betting legislation, calling it "extortion" for leagues to demand money for hosting honest games. (AP Photo/John Locher, File)

CHARLESTON — With all of West Virginia’s casinos now online with sports betting, the industry’s next gamble will be with just how — or when — the federal government will get involved.

The proposed legislation, called the Sports Wagering Market Integrity Act of 2018, would place minimum requirements for states to follow when approving sports betting operations. The Department of Justice would take the lead on developing the rules and standards for the states.

“This bill is the first step toward ensuring that sports betting is done right in the states that choose to legalize it,” Hatch said. “Just as importantly, it provides protections for states that choose not to go down that path.”

“I believe the time is now to establish a strong national integrity standard for sports betting that will protect consumers and the games themselves from corruption,” Schumer added. “I will strongly advocate for this bill to move forward and for Congress to vote to pass federal legislation very soon.”

While the legislation makes no mention of integrity fees – additional taxes on sports betting that goes directly to the major sports leagues – it does require the casinos and third-party operators to use licensed sports data from the leagues. Major sports leagues, such as the NFL and the NCAA, have lobbied state legislatures to include integrity fees in their sports betting laws with no success. Both the NFL and NCAA support the Hatch/Schumer bill.

“The Sports Wagering Market Integrity Act reaffirms the long-standing commitment of Congress to protecting the integrity of American athletics,” said Jocelyn Moore, executive vice president of the NFL. “We appreciate the bipartisan leadership demonstrated by Sens. Hatch and Schumer in bringing forth this commonsense legislation, and we urge its swift enactment.”

Sen. Shelley Capito, R-W.Va., said there needs to be more time to observe how West Virginia and other states regulate sports betting before federal oversight is necessary.

“I feel that we should examine West Virginia’s experience before moving forward with national legislation,” Capito said. “Our state has passed a law, and I believe the federal government doesn’t need to interfere with the state’s judgment unless circumstances demonstrate that intervention is needed.”

Delegate Shawn Fluharty, D-Ohio, was part of a bipartisan group of lawmakers that supported the state’s sports betting initiative. He said that any regulation of sports betting should be left to the states to manage and administer without federal interference.

“Many states are already moving forward on their own and have contracts in place,” Fluharty said. “That’s evidence of the free market working. There’s no reason for big government to come interfere with the process. The last time the federal government attempted to dabble in sports betting, we got an unconstitutional law known as PASPA,” or the Professional and Amateur Sports Protection Act.