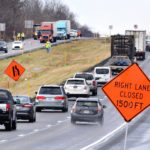 Photo by Scott McCloskey Motorists traveling on I-70 near the West Virginia/Pennsylvania state line encounter delays Tuesday as traffic is being restricted to one lane in an area where the Tunnel Ridge coal company plans to perform underground mining over the coming months.

WHEELING — Expect to see lots of orange, fluorescent green and slow-moving traffic on Interstate 70 at the West Virginia/Pennsylvania state line over the next four-plus months.

The orange will be from the traffic barrels that on Tuesday closed one lane of I-70 in each direction for about a mile. The fluorescent green will be from the safety vests workers from both the West Virginia Division of Highways and the Pennsylvania Department of Transportation will be wearing as they monitor the area on a daily basis.

And the slow-moving traffic? Well, shutting down a lane of one of the nation’s busiest stretches of interstate to allow for underground longwall mining is most definitely going to lead to some traffic backups.

Tunnel Ridge LLC, a coal mining operation based in Ohio County, informed highways officials in West Virginia and Pennsylvania that the company would soon be mining a coal seam that runs under the interstate.

The mining will begin under I-70 in Pennsylvania, and is expected to move west into West Virginia over the coming months.

With longwall mining comes subsidence, and that’s why one lane of the interstate has been closed between the West Alexander exit in Pennsylvania to just past the West Virginia state line. The speed limit also is reduced to 45 mph.

Joseph Szczur, district executive for PennDOT District 12, said his agency is currently working with a surveying crew to document the highway surface and surrounding terrain, including the median strip between lanes, to keep an ongoing record of what it looks like before any after the mining begins.

“This does cause us anxiety and headaches,” Szczur said, referring to the effort of monitoring the highway and making sure the safety measures are adequate as mining takes place beneath the surface.

He added that the expected subsidence could be as much as 4 feet in some areas. Szczur said the monitoring would be constant, 24 hours a day.

If an area does start to experience subsidence, crews will be on scene so that immediate repairs can be made.

The goal, he said, is to have as little impact on the traveling public as possible.

“We will be out in full force Monday,” he said, referring to when the coal company will begin to ramp up its efforts.

Travelers between Wheeling and Morgantown may recall a similar situation more than a decade ago when longwall mining took place underneath Interstate 79 between the Waynesburg and Kirby exits in Pennsylvania. PennDOT at that time had constant monitoring of the highway, with repairs made regularly when subsidence occurred.

Those repairs typically included rebuilding the highway with new asphalt, and also readjusting the slope of the median strip.

In fact, a 2011 report from the Pennsylvania Department of Environmental Protection and the University of Pittsburgh indicated Pennsylvania taxpayers spent $19 million to monitor and repair the section of I-79, according to reporting at the time from triblive.com.

“We’re trying to take precautionary measures,” Brabham said. “Getting some relief joints cut, just in case there’s settlement, we can kind of control where things move, but we really just don’t know what’s going to happen. … We’ve got a consultant on board that will be taking care of (monitoring), because we just don’t have the staffing to do it ourselves, and we have a contractor to do emergency repairs. We’re trying to see what happens in Pennsylvania.

“We do have plans, and we’ll have teams on standby to take whatever measures will be needed.”

The lane closure on I-70 is expected to continue through May 31.