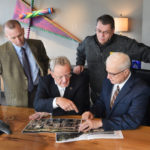 Photo by Scott McCloskey Planning for this year’s inaugural Ogden Wellness Weekend in Wheeling are, from left, Eric Anderson, race director of the new, Tough as Nails Urban Challenge; Jim Pennington (seated), CEO of The Health Plan; Joe Lovell, race director of the Ogden Newspapers Half Marathon Classic; and Perry Nardo, general manager of The Intelligencer and Wheeling News-Register. The Ogden Wellness Weekend is set for May 25-26 in downtown Wheeling.

WHEELING — What began as a conversation between two Wheeling business leaders on how to promote fitness has blossomed into a new event set to take place this summer in downtown Wheeling: the Tough as Nails Urban Challenge.

Perry Nardo, general manager of The Intelligencer and Wheeling News-Register, and Jim Pennington, CEO of The Health Plan, started talking almost a year ago on how to take the success of the annual Ogden Newspapers Half Marathon Classic — held on the Saturday morning of Memorial Day weekend — and grow it into a full wellness weekend.

Over several months and many discussions, the plan evolved not only into a new event for Wheeling, but also one that would highlight some of the city’s unique features while offering something new for the region’s fitness-minded citizens.

Along the way, the group expanded from The Health Plan and the Ogden Newspapers to include the city of Wheeling, the Ohio Valley Trail Partners and others, with the result being a new concept: the Ogden Wellness Weekend — two days of fitness, family and fun to celebrate the start of summer in the Friendly City.

“The enthusiasm and support that Jim and I have received from everyone involved in this new idea has been sensational,” Nardo said. “The open-minded, let’s-get-it-done approach really shines a spotlight on the commitment the leaders of our community have to new ideas and growth.”

“The Ogden Half Marathon Classic has been a staple of Wheeling’s fitness culture for decades and we’re pleased to help usher in a new era of fun and fitness with the expansion of the Ogden Wellness Weekend,” Pennington said. “Adding the new Tough as Nails Urban Challenge will not only expand the focus of fitness in downtown Wheeling, but also provide another unique family-friendly event that has something for everyone to enjoy! On behalf of The Health Plan, we are excited to partner with the Ogden Newspapers as a sponsor for this event.”

The concept behind the Tough as Nails is simple: competitors must tackle a series of obstacles that will incorporate many of Wheeling’s unique features. One of the challenges will utilize the wall between Celeron Plaza and the city’s Heritage Trail in Center Wheeling that once lifted train tracks into the former B&O Building terminal. Another will utilize the Robert C. Byrd Intermodal Transportation Center. There also are plans to utilize the Chapline Hill tunnel between South and Center Wheeling.

The course will be 5 miles in length, with participants running or walking from challenge to challenge. The event is set to begin at noon.

Nardo said additional challenges continue to be identified, and the race is utilizing the talents of the team at Seven Springs Mountain Resort, which annually holds its Mud on the Mountain event, to help with the process.

“We are looking forward to bringing the highlights of our Mud on the Mountain races at Seven Springs to the streets of Wheeling,” said Seven Springs spokesman Alex Moser. “It has been a fun experience retrofitting the experience for the city. We think that runners from the Ohio Valley and beyond will find this to be a very challenging race!”

The riverfront will take on a festive atmosphere on Sunday following the Heritage Trail Bicycle Tour and Tough as Nails challenge as participants and spectators can enjoy live music, a beer garden and multiple food vendors while they enjoy the scenic view of the Ohio River.

Wheeling Mayor Glenn Elliott said the event-filled weekend will help promote healthy living while also bringing attention to some of the positive things happening throughout the city.

“We’ve been talking with Jim Pennington and Ogden race representatives on this topic for more than a year, and I think it’s just a terrific opportunity to not only put on something new here in Wheeling, but also promote healthy living while showcasing our downtown,” Elliott said. “We commend the Ogden Newspapers and The Health Plan for stepping forward and making this happen.”

If you’re not up for an urban challenge, there’s still plenty to do over the Memorial Day weekend.

First, on Saturday, May 25, the Ogden Newspapers Half Marathon Classic will take to the streets of Wheeling for its 43rd running. The grueling, 13.1-mile event is considered one of the toughest half marathons in the nation. The Half Marathon also includes events such as a 5K run, the family-friendly Ogden Fun Run, and the always popular OV Parent Tiny Tot Trot.

Then, on Sunday, May 26, the day starts early – 8 a.m. – with the Ohio Valley Trail Partners’ 12th annual Wheeling Heritage Trail Bicycle Tour. The event features three rides for all cycling levels: 62 miles, 30 miles and 10 miles. All three rides primarily utilize the Heritage Trail, but the 62-mile ride leaves the trail near the Ohio/Brooke County line for a loop through Bethany and West Liberty, with a stop at Bethany College.

Nardo commended the Ohio Valley Trail Partners for working with the group to become part of the larger wellness weekend.

“The Ogden Half Marathon, the Tough as Nails and the Wheeling Heritage Trail Bicycle Tour really tie the weekend together from a fitness standpoint,” Nardo added.

Doug Wayt, president of the Ohio Valley Trail Partners, said the wellness weekend could also be a plus for bringing families to Wheeling, as the wide range of outdoor offerings has something for everyone.

“There’s also a great opportunity for the city of Wheeling to showcase things that are happening to make our city a better place – a youth-revisited city, in a sense – while creating new fitness opportunities,” Wayt said.

For more information on the Tough as Nails, the Ogden Newspapers Half Marathon Classic or the Wheeling Heritage Trail Bicycle Tour, visit ogdenwellnessweekend.com.