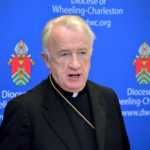 WHEELING — An investigation into former Wheeling-Charleston Diocese bishop Michael Bransfield involved not only allegations of sexual harassment but also financial improprieties, and the matter has now been forwarded to the Vatican in Rome, the Diocese announced Monday.

On Sept. 13, 2018, the Holy See announced Bransfield’s retirement as bishop of the Diocese of Wheeling-Charleston and appointed Baltimore Archbishop William E. Lori as Apostolic Administrator of Wheeling-Charleston, with a mandate to conduct a preliminary investigation into allegations of sexual harassment of adults and financial improprieties by Bransfield.

The preliminary investigation, which took place over five months, was conducted by Lori with the assistance of a team of five lay experts. The investigative team examined multiple allegations of sexual harassment of adults and financial improprieties. It involved interviews with more than 40 individuals, including Bransfield. The investigation has now been completed and will be sent to the Holy See for final judgment.

At the request of those who provided testimony, victims will not be identified, nor will details of their personal accounts be disclosed.

“Pending the assessment of the findings of the Holy See, as Apostolic Administrator of the Diocese of Wheeling-Charleston, I have directed that Bishop Bransfield is not authorized to exercise any priestly or episcopal ministry within the Diocese of Wheeling-Charleston,” Lori said. “I have further directed the Diocese to implement a third-party reporting system for any sexual or financial impropriety on the part of its bishop, clergy, religious and lay employees and volunteers.”

The Diocese of Wheeling-Charleston is committed to providing counseling to any who may have been harmed, including clergy, religious and lay personnel, Lori said. Any possible victim is urged by the Diocese to contact the Safe Environment Office at 833-230-5656.

“I apologize to any who have suffered harm and express my gratitude to the five men and women who conducted the investigation, as well as to those who participated in this difficult process,” the Archbishop said. “It is my privilege to serve the Diocese of Wheeling-Charleston as the journey toward healing begins anew and as we anticipate the appointment of a new bishop.”

A press conference is scheduled for 1:30 p.m. today at the Chancery office in Wheeling.