Sports Betting Put on Hold at Wheeling Island, Mardi Gras with March Madness Around the Corner 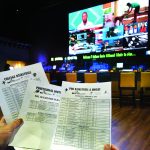 WHEELING — A “contract dispute” with a third-party technology supplier has led Wheeling Island Hotel-Casino-Racetrack and Mardi Gras Casino & Resort to temporarily suspend all sports betting activity at the two tracks, including all bets placed through the BetLucky app.

“We have been informed by Miomni Gaming, our sports wagering platform provider in West Virginia, that they have encountered a contract dispute with a third-party technology supplier,” a statement from Delaware North, the parent company of Wheeling Island and Mardi Gras, said. “This has resulted in the interruption of the Wheeling Island and Mardi Gras sports-betting operations as well as the BetLucky.com mobile app from accepting new sports wagers. We are honoring and redeeming all resulted bets and are working to determine a time frame for restoration. We apologize for this interruption in service.”

A spokesperson for Delaware North confirmed the suspension this morning, which was first reported late Thursday by legalsportsreport.com. The spokesperson said additional information would be made available through the casinos’ parent company, Delaware North.

Wheeling Island and Mardi Gras, which is located in Cross Lanes, are the only two of West Virginia’s five casinos to offer mobile betting through the BetLucky app.