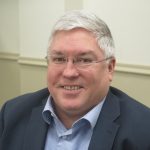 WHEELING — Investigations of Medicaid fraud would move to the West Virginia Attorney General’s Office under legislation recently passed by the Legislature, and Attorney General Patrick Morrisey thinks the move could benefit the state financially.

The Medicaid Fraud Unit within the State Department of Health and Human Resources presently oversees the investigations, and Senate Bill 318 would transfer that unit to the State Attorney General’s Office effective Oct. 1.

The measure is awaiting signature by Gov. Jim Justice.

“One reason we’ve always wanted to transfer the unit is we think it is always better to have an independent fraud unit,” Morrisey said. “Right now, the individuals who pay and chase the claims report to the same people. We’re working hard to create that independence, and we think that could be beneficial in the pursuit of fraud.”

Across the nation, attorneys general oversee Medicaid fraud investigations in 43 of the 50 states.

“We believe this is going to lead to very positive things for West Virginia,” Morrisey said. “Medicaid is the second largest (expenditure) program in the state.

“We believe if you can just improve even slightly — and we want to improve more than slightly — the figures we could bring in would be just tremendous.”

West Virginia pays out $3.8 billion annually in Medicaid expenditures, and this figure is second only to what West Virginia spends on education, according to Morrisey.

“If you could eventually improve 1 percent — that’s a lot of money you’re going to save,” he said. “We’re working to educate the public about the importance of going after Medicaid fraud, and if residents know of incidents of fraud they should let us know.”

“Assuming the governor signs it — and we’re hopeful that he will — we will be in a position to build on our strength,” he said. “We already do a lot of good work fighting consumer fraud and disability fraud.”

Morrisey said his office has saved the state about $14 million in fraudulent disability claims since he started the disability fraud unit in 2016, with $6 million in savings coming in 2018 alone.

“We have three people in our office working on that,” he said. “That’s a pretty good return on investment, so we believe we can have success on the Medicaid fraud side.”

As the office sits down to develop a strategy to combating Medicaid fraud, Morrisey wants to discuss the issue with attorneys general from other states to see what successful plans they have implemented.

“Once again, (Medicaid) is the second largest budget expenditure in West Virginia, and it deserves a specialized focus,” he said.

Efforts to move the office in West Virginia began in 2014, when House Judiciary Chairman John Shott, R-Mercer, first introduced legislation. Similar bills surfaced in the legislature over the past five years, but were not successful until this year.

“We only push for changes we think are going to benefit,” Morrisey said. “But anytime there is change, there is nervousness.”

Morrisey commended Sen. William Ihlenfeld, D-Ohio, for joining with Republicans to vote for passage of the measure in the Senate during the recent legislative session.

“This has been a long time coming,” Morrisey said. “We have been really pleased that we were able to get bipartisan support on the Senate side.”