Tour Designed to Encourage Others to Improve Their Health 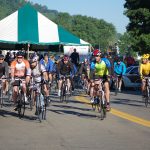 “They can mean so much to our communities,” said Wayt, co-president of Ohio Valley Trail Partners. “People don’t recognize what they mean.”

Organization members met recently to discuss their upcoming endeavor: the Wheeling Heritage Trail Bicycle Tour, now in its 13th year. The tour is set to pedal off at 8 a.m. Sunday, May 26, from Wheeling Heritage Port.

The tour is designed to encourage exercise, promote the region’s walking and biking trails and raise money for maintaining them, Wayt said.

“By promoting people to get out on this trail, which is really used by a lot of people for walking and biking, it is helping to improve the general health of our whole region,” he said.

This year, the Heritage Trail Tour is part of the larger Ogden Wellness Weekend, which includes the 43rd running of the Ogden Newspapers Half Marathon Classic on Saturday, May 25, and the inaugural Tough as Nails Urban Challenge set for noon Sunday, May 26, after completion of the bike tour. The Ogden Newspapers and The Health Plan of West Virginia are the weekend’s primary sponsors.

Having all three events on Memorial Day weekend ensures something for just about everyone when it comes to getting fit and active to start the summer, event organizers have said.

Trail Partners members discussed planning for the tour as well as their ongoing work, such as repairing bridges, creating trail signage and supporting Wheeling projects such as the planned bike sharing program.

Wayt said he joined the group in its early days to help develop trails in the area.

The group, originally called the Walkable Wheeling Task Force, was launched by Bill Reger-Nash of West Virginia University in the early 1990s to promote walking as exercise.

Over time, the group’s purpose transformed into aiding the Wheeling Heritage Trail, the Brooke Pioneer Trail and others in the Ohio Valley while still encouraging exercise and appreciating the rich history of the area, Wayt explained.

“I was a very active bicycle rider and I was very much wanting to see trails developed and more trails created,” he said. “Where else is a better place? You’re away from traffic, you’re safe. Wheeling has one of the best trails in the state.”

The bike tour is set for May 26, Sunday of Memorial Day Weekend, and includes three different rides for all ages and experience levels of cyclists.

The event includes a 10-mile, 30-mile and 100-kilometer ride, the latter of which features a hilly loop through Bethany and West Liberty with a stop at Bethany College.

Wayt said each ride will be escorted by Wheeling police and volunteers and include several rest stops.

“It’s been my experience that participants in this event involve a lot of families, a lot of parents with children, grandparents,” said Mike Kinter, vice president of the Trail Partners. “It’s something you can do with your kids. It’s a healthy event and it’s really quite a lot of fun.”

The tour usually sees about 300 riders from six states, Wayt said, adding that the event has become an annual tradition for many families.

“We’ve been told by many people in the Pittsburgh area that this is the best bicycle event in the whole region,” he said.

Wayt also noted that the tour is a fundraiser, with money from the event going back into the Trail Partners’ work to benefit the region’s trails.

In past years, money raised by the tour allowed the group to treat several trail bridges, paint visibility lines, purchase bicycle racks and bicycle repair stations for Wheeling and support other biking and trail organizations.

“We to serve as guardians and ambassadors for trail development, usage and health promotion in the Upper Ohio Valley,” Wayt said.

Registration for the Heritage Trail Tour or any of the other Ogden Wellness Weekend events can be done at ogdenwellnessweekend.com.

As a final note, Wayt said that the event is a ride, not a race.

“We don’t want people to think they have to sweat too hard,” he said. “Ride at your own pace.”

The bike tour also will be part of the first “Scatterday Challenge,” named for the late R. “Scat” Scatterday, longtime race director of the Ogden Newspapers Half Marathon Classic who died earlier this year. The challenge will consist of the following:

∫ Running or walking the Ogden Newspapers Half Marathon Classic, set for a 7:30 a.m. start on Saturday, May 25;

∫ Biking either the 10-mile or 30-mile leg of the Ohio Valley Trail Partners Heritage Trail Bicycle Tour, set for an 8 a.m. start Sunday, May 26;

∫ Competing in the inaugural Tough as Nails Urban Challenge, a 6-mile, 20-obstacle challenge through downtown, Center Wheeling and East Wheeling. The Ogden Newspapers and The Health Plan of West Virginia, primary sponsors for the event, have set a noon start on Sunday, May 26.

Through April, competitors who sign up for the challenge will have a special price of $99 for all three events, said Wellness Weekend organizer James Gibbons. Signup can be found at ogdenwellnessweekend.com.

The Wellness Weekend begins Saturday, May 25, with the Half Marathon Classic, the Ogden Newspapers 5K Run & Walk, the Ogden Fun Run and the Ogden Tiny Tot Trot, sponsored by Ohio Valley Parent. The festivities on May 26 begin with the bike tour, followed by the Tough as Nails event.

But the Wellness Weekend is about more than just the competition — it’s also about community. Both on Saturday, May 25, and Sunday, May 26, Wheeling’s riverfront will take on a festive atmosphere following the events of those respective days. There will be live music, a beer garden and multiple food vendors as participants and their friends and families enjoy the scenic views of the Ohio River.