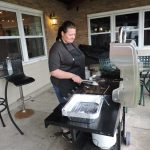 The restaurant-style venue is open to anyone who would like a hot meal and is a part of the organization’s “different kind of soup kitchen” initiative.

Upon entering the newly renovated diner, a host will seat you at a table. Once seated, a young volunteer who is using the opportunity to learn waitressing skills, will come take your order.

The menu for the grand opening Friday consisted of starters including chicken noodle soup or salad; a main course of pan fried pork chops, grilled chicken breast or steak tips; and a choice of two sides. The bistro also features a side menu for children.

Meals served there are completely free, and the staff invites anyone who is in need of a hot meal or in need of some company to come visit the site.

Majors Norma and Lewis Patrick run the Bellaire local command. Maj. Lewis Patrick said they are taking a holistic approach to help people, which includes not only helping to meet their physical needs, but also their emotional and spiritual needs. They want want people to feel like they had a night out after eating at the bistro, he said.

Community and local church members held fundraisers to help raise the money so that the Salvation Army could transform its dining area into the bistro it has become. Many local agencies contributed food donations, the Patricks said. Volunteers and Salvation Army employees helped make the night happen.

The bistro seats 40 people. It will be open opposite other church and soup kitchen functions. Upcoming bistro dates include May 10 and 17 and June 14 and 21, with operating hours from 4-6 p.m. Eventually, depending on the success of the bistro, the organizers would like to expand the dates of operation.

The Belmont County Salvation Army also will begin holding its summer yard sales on May 4 in the parking lot of Grisell’s Funeral Home, 400 33rd St., Bellaire. It will take place at 10 a.m. on the first Saturday of each month.