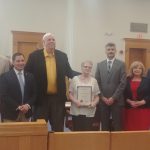 Photo by Alan Olson Gov. Jim Justice is joined by numerous local government representatives and representatives from the Bel-O-Mar Regional Council to present nearly $1 million in funding to the city of Cameron.

MOUNDSVILLE — Gov. Jim Justice met with local government leaders Monday afternoon in Marshall County, announcing the awarding of almost a million dollars to Cameron and $125,000 to the Marshall County Commission for infrastructure improvements.

Additionally, Marshall County Commissioner John Gruzinskas was on hand to meet Justice in accepting the grant to the county, with the purpose of improving broadband connectivity to more areas of the county. This funding will allow local officials to study and identify service gaps in their communities and determine what technologies may be needed to close those gaps.

“This is one of the most …. tough economic things that we need to do,” Justice said.

These funds are part of $13.1 million in federal Community Development Block Grant dollars that have been dedicated for various infrastructure projects throughout the state this year by the United States Department of Housing and Urban Development.

Justice spoke for about an hour on various topics, such as the need for education reform within the state and the condition of the roads in the region. Several members of the gathered audience – around 25 people, consisting of various representatives from local governments, with a small handful of residents who sought to confront Justice on the roads.

One man, Robert Combs, said many roads in the county were so bad, he felt they would make national news if they were in any other part of the country.

“I’m disappointed that this room isn’t filled,” Combs said. “The governor is here, and there’s a lot of people concerned, but I understand why they’re not here: because it’s been going on for seven years now. Not potholes, but sinkholes. We’ve been complaining all this time, and we’re not getting any help.”

“I’ve been out to Little Grave Creek, and these sinkholes, if they were in Florida, it would have made national news. There’s seven sinkholes along seven miles of road, and it’s been like that for seven years. Imagine going to work every day, and there’s cars waiting, because (the slip) goes to the middle line. And it’s not just cars, it’s school buses.

Combs lamented what he saw as an excessive amount of red tape which prevented meaningful action by the Environmental Protection Agency.

“I think, with your power and influence, you could get on the phone with someone at the EPA, get us up front. Get somebody here.”

“That seems perfectly logical,” Justice replied. “Seven years is a long time. Two years is a long time. Six months is a long time. There’s a lot of things out there that may fall under the EPA’s guidelines, and we really can’t move the needle, no matter who you are. All I can do is tell you just this: just give me this summer. Give me the time I’m dialed completely in to the secondary road situation.”

“We had to pass Roads to Prosperity. We had to get the state headed in the right direction, or else I’d just sit here saying ‘There’s nothing I can do.’ It doesn’t matter that it’s been seven years that it didn’t happen. Now’s the time for me to fix it, some way, somehow.”

Justice visited Marshall County just hours after visiting the Brooke County Commission office in Wellsburg, presenting Brooke and Hancock Counties with another $125,000 in funding, also to be used toward broadband development.

“Any day you’re able to give away over a million dollars is a great day for everyone involved,” Justice said. “With this funding, we’re going to be able to help a lot of people in northern West Virginia in all kinds of ways.”