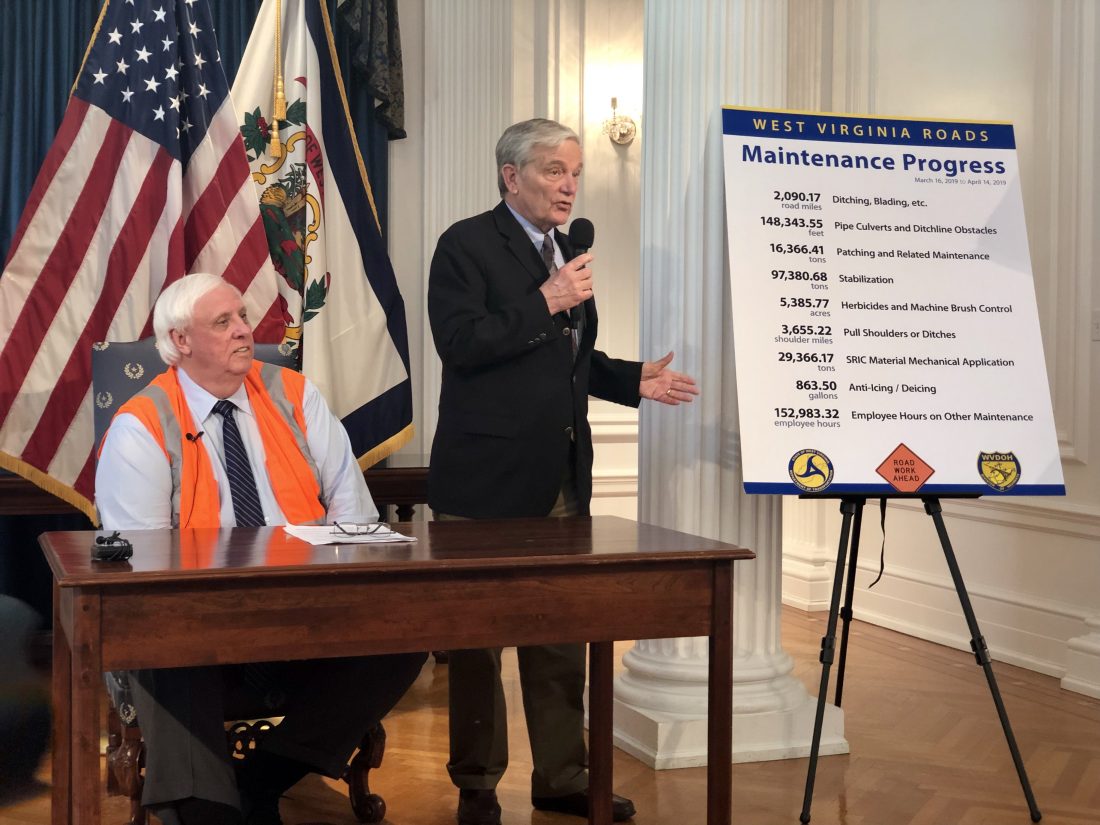 Photo by Steven Allen Adams Gov. Jim Justice looks on as Transportation Secretary Byrd White goes over the work the Division of Highways employees have done on secondary roads over a 30-day period.

“They’re in really bad shape … and I see there’s an emergency here,” he said last Monday when asked about the roads following a grant presentation in Cameron.

Then, on Wednesday, West Virginia Division of Highways Commissioner Jimmy Wriston took his tour, traveling through some of the county’s more damaged and slip-laden back roads. He, too, remarked on the road conditions during an event in Moundsville.

“Today I saw, firsthand, the condition of secondary roads in Marshall County, and the efforts our hard-working DOH crews are involved in,” Wriston said.

Marshall County commissioners earlier this month declared a state of emergency for the county’s roads. There are hundreds of slips throughout the county’s 679.5 miles of asphalt, and poor maintenance, record rainfall and heavy truck traffic all have led to road issues that are now affecting residents’ livelihood.

Until last week, the governor and his highways commissioner had ignored the problems in Marshall County, instead looking east toward Preston County as the epicenter of the state’s road concerns. The tone changed somewhat after their separate visits.

Wriston touted Justice’s plan to address the state’s secondary roads. He also lumped the problems of Marshall and Preston county in with the rest of the state — even after his visit to an area where school buses can’t drive because the roads literally have fallen over the hill.

“There is no doubt, much work is needed in Marshall County, Preston County and the 53 other counties across West Virginia, and that is exactly what we are doing through Governor Justice’s Secondary Road Maintenance Initiative,” Wriston said. “Gov. Justice made it very clear that he wants attention paid, right now, to roads leading to the places West Virginians travel to most. We have released a prioritized list of projects for each county and we are executing the plan every day. The list will be updated regularly to show the public our progress. We are focused on getting it done.”

There is more road work taking place, as several Marshall County slips that until last week had been neglected are now seeing attention.

Currently, there are a dozen slips in the county being repaired, according to the DOH. There’s also a mowing program underway, ditching being completed and patching under way, where needed.

Justice said he plans to return to Marshall County every 45 days to assess the work being completed. That means the governor should be back by June 6 to get an update on roadwork and conditions.