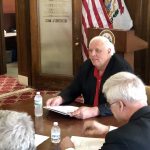 CHARLESTON – Responding to recent votes of no confidence by a handful of state Republican organizations and an article in a national publication, Gov. Jim Justice used a few words to describe them.

“Just to be real blunt, I think it’s really sad because this day and time people will do anything in politics to try to knock somebody down or to get an edge or obtain something for themselves,” Justice said.

Justice, in an exclusive interview Saturday after a Board of Public Works meeting, addressed multiple issues, including the revelation of a U.S. Department of Justice investigation into the governor’s Greenbrier Classic golf tournament and the charity that manages it.

“Anybody who knows me has to know that I may very well make a mistake, but I can tell you unequivocally with all my soul that I’m not going to do anything wrong and all I have tried to ever do is help people,” Justice said.

Justice acknowledged the financial difficulties for the resort and the golf tournament, which was renamed to A Military Tribute at the Greenbrier. He blamed the 2016 flood which caused extensive damage to the resort, as well as insurance companies for not resolving all the damage claims. The resort, managed by the governor’s daughter Jill, is suing several insurers after multiple delays in premium payouts.

“It especially hurts when you take the Greenbrier for example,” Justice said. “You know you saved 2,000 jobs and opened all your doors to flood victims and fought through all this crap when the insurance companies wouldn’t pay you in regard to the horrendous damage to the Greenbrier. It’s made it tough.”

On March 6, the Justice Department’s Public Integrity Section sent the state Department of Commerce a grand jury subpoena for records pertaining to the sponsorship of the Greenbrier Classic between 2014 and 2017, when Justice ordered commerce to end its sponsorship. Justice said he is fully cooperating with the investigation.

“I will be the first to say that I’m absolutely an open book,” Justice said. “Anyone who wants to check anything and look into anything and investigate anything, I welcome it. I’m not begrudging those people because they have to do their job. I don’t care about any investigation because I want to respect and honor them.”

These groups accuse Justice of not following the state Republican Party platform in regard to supporting school choice. Justice blamed the no confidence movement on a small disgruntled group of Republicans.

“You’ve just got some people who are incentivized by wannabes that just want to throw garbage,” Justice said. “This whole thing is a coordinated effort and it’s awfully ironic that it happened at one time.”

Justice said he supported many of the items in Senate Bill 451, the education omnibus bill pushed by Senate President Mitch Carmichael, R-Jackson. The bill died in the House of Delegates over disagreement over public charter schools and education savings accounts.

The bill also included pay raises and hiring incentives for teachers in high-need subjects, such as math. It also included a number of changes to how much money flows to county school systems, as well as funding for additional support staff to help with socio-economic needs of students. Justice supported the House version of SB 451, which limited charter schools to a two-school pilot and removed education savings accounts.

Justice called a special session for education betterment in March, with lawmakers likely to return in May. He hopes that the Legislature can come to an agreement on reforms in a more collaborative way.

“I felt like if I didn’t step in, the Republicans were going to end up on the losing side of a battle that is so important to our state and it would hurt the Republican Party,” Justice said.

Turning to a recent article by Forbes magazine on the business practices of Justice’s companies, the governor said that the tone of the article changed after U.S. Sen. Joe Manchin reached out to the magazine. Forbes writer Christopher Helman reported that Justice companies owe more than $10 million to vendors, $13 million in tax liens in several states, $60 million from a civil case and $200 million in mine reclamation liabilities.

“That Forbes article is the thing that really blows me away,” Justice said. “Those people came a year ago on a mission to write something really good. They even went hunting with me, because they knew I loved the outdoors and took all kinds of pictures there. They called our people and said Joe Manchin called them and told them all this stuff and before you know it, they’re rekindling all kinds of inaccuracies beyond belief and it becomes a political hit job.”

Justice did not specifically address what was inaccurate about the Forbes article.

A spokesperson for Manchin said the Senator has not spoken to Forbes Magazine about Justice.

For Justice, the last three years has been spent cleaning up the mess left behind by other governors, including Manchin and Earl Ray Tomblin. After coming into office with a project $500 million budget shortfall in 2017, lawmakers this year passed a budget that has a projected budget surplus even with cuts to Social Security and coal severance tax rates.

“At the end of the day, when I walked through the door we were dead bankrupt,” Justice said. “We have crawled from the terrible red numbers to black numbers and we’re doing lots and lots of stuff for our roads, our vets, our education, and our elderly, and all the stuff I’m trying to do to combat this terrible drug epidemic.”

“It’s a big job and it’s a basketful of success,” Justice said. “have honestly achieved so much in this state and there is so much more to do.”