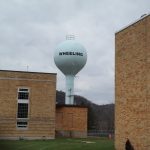 WHEELING — Several projects are up for consideration by Wheeling City Council this month, with spending totaling near $4 million and providing for work on water wells, road repairs and other infrastructure upgrades.

Among them are about $1 million for adding new water wells and about $2.5 million for design work for Wheeling’s long-term control plan to improve sewer lines and wastewater treatment in the city.

Council heard first readings of several spending ordinances at its meeting Tuesday and will vote on the measures April 16.

For one, council heard an ordinance allowing the city to pay a contractor $1 million to build two new water wells. The wells will contribute to the city’s water supply, which is split between existing wells and water from the Ohio River, Public Works Director Russell Jebbia said.

“We’re mandated to have an alternate water source for water production,” Jebbia said, noting that the wells serve as a backup in case the river experiences an oil spill or some other contamination event.

Through the project, the city will construct two new wells, one in the northwest corner of its treatment plant property in Warwood and one near North 19th Street, Jebbia said. The work will take about five months and will begin once the ordinance is approved.

Work on the project will include drilling the wells, installing pumps, adding wiring and running pipes between the wells and the treatment plant, Jebbia said.

About 40 percent of the city’s water supply currently comes from wells, City Solicitor Rosemary Humway-Warmuth said. The supply is a mix of well water and treated water from the river.

Meanwhile, the city is also considering an ordinance to spend $2.52 million for design work on its wastewater and stormwater projects through the Ohio-based engineering firm CT Consultants.

The projects are part of the third phase of Wheeling’s long term control plan totaling $28 million. Council approved $10 million for the first section of the phase in December.

The work involves improving and replacing the city’s sewer lines as well as addressing “failing infrastructure needs in the municipal wastewater system,” according to the ordinance.

The $2.52 million up for consideration, though, is for designing and planning the various projects in this part of the third phase, Humway-Warmuth said, and is a part of that $10 million budget.

The city still has to determine how to pay for the $18 million for the rest of the long term control plan’s third phase, she noted.

The body also heard an ordinance authorizing Wheeling to spend about $165,000 for road slip repairs on Glenhite Road, Angle Avenue and East Cardinal Avenue at its meeting Tuesday. The work will involve piling and building lagging walls.

“Over the last year, the city has experienced numerous road slips,” Vice Mayor Chad Thalman said. “The money set aside will address three of those slips. Maintaining and repairing our roads is a high priority and I’m happy to be able to move forward on these slip repairs.”

In addition, the city is considering two other less-costly projects. One involves spending $21,694 to replace meters at the city’s water treatment plant, which Jebbia noted is fairly routine.

The other project on the table is adding fencing to the playground at Pulaski Field in South Wheeling, which will cost $44,478.