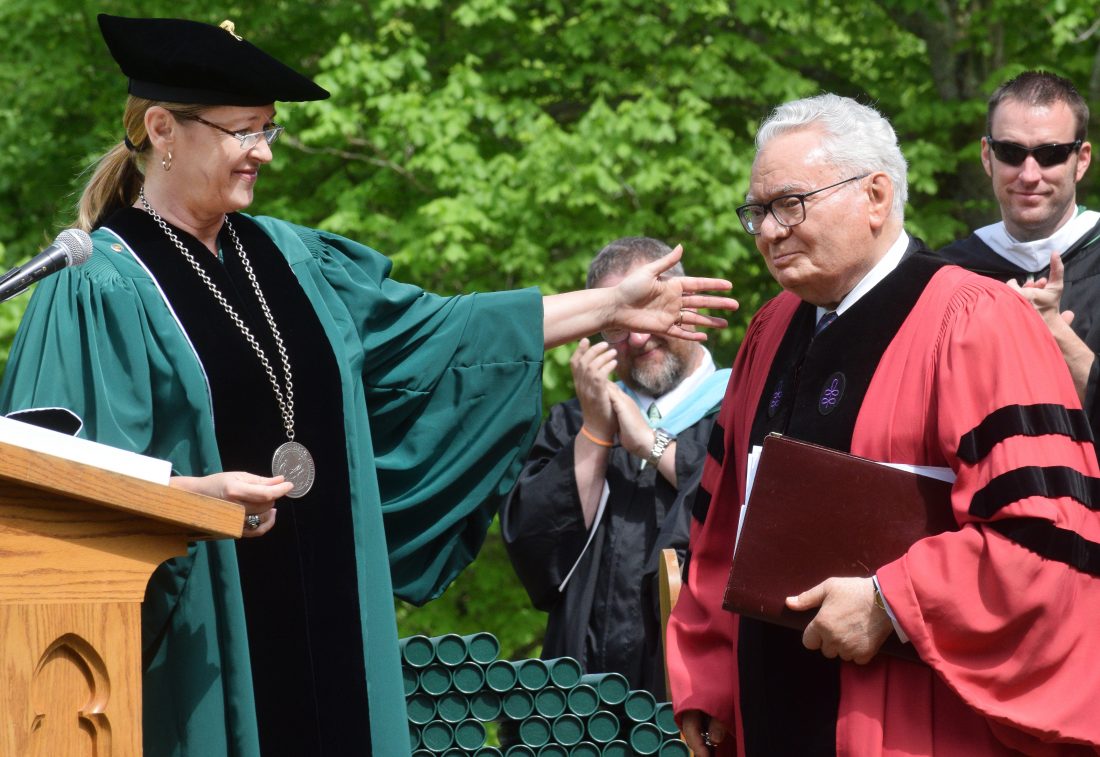 BETHANY — One of the youngest survivors of the Auschwitz and Sachenhausen concentration camps delivered a message of hope, encouragement and respect to Bethany College’s graduates Saturday during the school’s 179th Commencement Ceremony.

“The U.S. is made up of such a wonderful mix of nationalities and people, that familiarizing yourself with their backgrounds and histories will enrich your knowledge about them and the world they came from,” Thomas Buergenthal, a Bethany alumnus and world-renowned judge, told the graduates during his keynote address. “And above all teach, your children to respect those who make up the people of your community, regardless of the color of their skin, their religious beliefs or national origins … and please treat immigrants with respect and try to befriend them.

“Remember, that just as your children, their children may well be the future of this country,” he added.Dr. Kayce Mobley, assistant professor of political science, introduced Buergenthal and said “his life is a testament to the human ability to overcome horrific conditions and then to dedicate one’s self to improving those conditions for others.”

“He once made a home at Bethany College,” Mobley said. “He left post-war Europe and made his way to this very campus.”

Buergenthal, who spoke briefly about the human atrocities that took place in a concentration camp during his childhood, told the graduates to learn more about the people who comprise their communities and what part of the world they or their relatives came from. An uncompromising advocate for human rights, Buergenthal, who served as the American judge on the International Court of Justice from 2000 to 2010 and was a judge and president of the Costa Rica-based Inter-American Court of Human Rights from 1979 to 1991, asked those who gathered at the Dr. Fred H. Tilock Amphitheatre at the Pennington Quadrangle to consider his advice.

“Now, given my age, I asked myself, whether a person who graduated from college nearly a half century ago can have anything of value to say to you, today’s Bethany’s graduates. … I ask it because today’s world is so different than the world of 1950,” he said.

“You are the children of the IT (information technology) revolution, you have been raised on it, you understand it. … In short, the existence of this generational divide suggests the legitimate question, ‘Whether there is still anything of value that my generation can teach your generation,'” he commented.

Buergenthal went on to suggest to follow a career that will enable the graduates to contribute to a cause or a subject close to their hearts.

“Don’t be afraid to have ideals. Personal satisfaction will follow if you are happy in what you are doing,” he said.

“You have have no doubt frequently heard someone describe as a self-made man or women — don’t believe it,” he explained. “This self characterization is almost always a myth. No one is self made — in the sense that he or she has never been helped by others to achieve what they aspired to become. There always will be someone in your life who has helped or will help you with your career goals or other important ways. … I can’t think of anything I has achieved in my own life in which I was not helped by some person. Believe me, it helps to have a willing and wise mentor,” he added.

“Sometimes you will be helped by a total stranger … and you may not even know why,” Buergenthal said.

He went on to provide an uncomprehensible account from his childhood. In Auschwitz, where he arrived in 1944 as a 10-year-old boy, the SS guards would resort to “so-called selections” to decide whether people would be allowed to live for a while longer, or die that very day. During one such selection, he was torn away from his father and taken to a barracks, to remain there until the SS had gathered a larger group for the gas chamber.

“A few nights later, I thought I was hearing a lot of noise, but continued to sleep,” he said. “The next morning I realized that the men who had come with me were no longer in the barracks. When I asked my bunk-mate what had happened, he told me that the SS had come in during the night, taken all the men from my group to the gas chamber. How did I escape that fate? Later I found out that the head of the barracks, a young Polish doctor, had torn up my name card with a red cross on its back and replaced it with one without the cross.

“That cross he knew indicated that I was part of a group that was destined for the gas chamber,” he said.

Buergenthal went on to explain how later in life he went on and was assisted in other ways by individuals who helped guide him through his college years, including Bethany College, to where he received a scholarship for his outstanding grades. He arrived in the U.S. in 1951 at the age of 17.

“There is much to be learned by reading about other counties, or better still, by visiting them or getting to know people from those counties,” he said. “Whatever you do, remember, if you plan to remain a vital or interested human being you must continue to learn by reading, by traveling, by seeing good movies and plays, developing hobbies and getting to know people of different backgrounds. … And please try not to close yourself off from your community.”

At one point in the ceremony, Buergenthal, who is also the author and co-author of more than a dozen books and a large number of essays on international law and human rights subjects, was also honored with a Bethany scholarship for refugees in his name. The proclamation was presented by college President Dr. Tamara Nichols Rodenberg. Following the presentation, the crowd also joined in to sing “Happy Birthday” to Buergenthal, who turned 85 Saturday.

Also during the ceremony, graduates Emily Rose Griffith and Haley Autumn Thompson were announced as the co-valedictorians and each accepted the Oreon E. Scott Award.