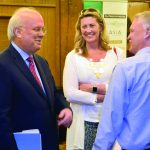 Karl Rove, left, a senior adviser to former President George W. Bush, was recently a speaker at the Healthcare Symposium, sponsored by The Health Plan. Photo by Scott McCloskey

WHEELING — Health care is the issue that is most important to Americans, and it is time Republicans stop ignoring it and start talking about it, GOP policy consultant Karl Rove said Thursday.

Rove, who served as senior adviser to former President George W. Bush, was the final speaker at the Healthcare Symposium 2019 sponsored by The Health Plan. The two-day event took place at Oglebay Park’s Wilson Lodge.

Rove cited a number of surveys that indicate health care is the issue most important issue to Americans as the 2020 presidential election approaches.

“Republicans don’t like to talk about health care. Democrats talk about it all day long,” Rove said. “Republicans, they would almost rather talk about anything else than health care. Yet 41 percent of the American people say it’s the issue they care most about. What also is interesting is they find big changes threatening.”

Surveys have asked Americans whether they want Congress to focus on improving the current health care system or on totally abolishing it and implementing universal health care for all Americans. By a 2-1 margin, Americans want to see improvements to the system, according to Rove.

Data indicate that 55 percent of Americans are in favor of having Medicare for all Americans, but the approval rate drops to only about one in three people when they are informed of four things, he said.

First, expanding Medicare to all would cost about $32 trillion over the next decade.

Second, Rove said it is probable that the existing Medicare system would be abolished under a comprehensive system with all Americans in the same insurance pool. He said this could lead to a third problem — the rationing of services by medical providers, with some prescription drugs no longer being available under Medicare insurance.

Lastly, the reimbursement rate to health care providers under Medicare is likely to be cut by 40 percent under a Medicare for all system, according to Rove. This could lead to a shortage of doctors and nurses that are available to patients and the closing of some hospitals, he said.

“When you say those four things, it turns people upside down just like that,” Rove said.

Changes also aren’t likely to happen under the current political environment in Washington, D.C., he said.

“These people can’t do diddly squat together,” Rove said of Congress. “Secondly, we have grave and deep differences between the Democratic House and the Republican Senate. … Until the next election, there is absolutely no chance of presidential leadership that is going to be able to bridge the gap — and even after the next presidential election that’s going to be a hard goal to find.”

Only incremental changes in health care are going to be possible in the coming years, according to Rove. He anticipates that there could be more funding to curb opioid abuse or efforts to bring more generic prescription drugs to market.

Rove said he is deathly allergic to turkey and carries an EpiPen as a result.

“Don’t anybody give me a turkey sandwich. I’ll go into anaphylactic shock,” he said. “Why do we pay so much for an EpiPen when we could have a generic alternative?”