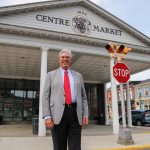 Thrasher, a former state commerce secretary, visited Wheeling on Wednesday. He is owner of the Thrasher Group, a firm headquartered in his home area of Harrison County, West Virginia.

“I built my company by driving to every little community across West Virginia — trying to do a water project, a sewer project or a sidewalk project,” he said. “Personally, I’ve done projects in all 55 West Virginia counties.

“And I can’t name five communities that are in better shape today than when we started. It breaks my heart. We lost 11,000 people (to emigration) last year, and they tend to be recent graduates who are young and ambitious. I decided I want to do something about it.”

Among Thrasher’s projects were some at the Greenbrier Resort in White Sulphur Springs owned by Gov. Jim Justice, and Justice called upon him to be his commerce secretary at the start of his term in January 2017.

Thrasher was forced out of the job in June 2018, a year after floods devastated the southern part of the state and the recovery effort handled through his office hadn’t met expectations.

Thrasher will now challenge Justice in the 2020 GOP primary, and said he didn’t speak much with Justice during his time as commerce secretary.

“I was in commerce for 18 months, and I didn’t sit down with the governor enough times to count on one hand,” he said. “I don’t have a relationship with the governor. He is nowhere to be seen. He doesn’t show up for work.”

Thrasher said he did come to an important revelation while serving as commerce secretary.

“My time in commerce proved to me we (West Virginia residents) are not destined to be 50th,” Thrasher said. “God didn’t tell us, ‘West Virginia, you’re going to be in last place.’ We’re in last place because we haven’t had really good leadership at the top level. That leadership has been too concerned about getting reelected, or satisfying whoever put them them in office.

“If I didn’t think I could change things, I wouldn’t do this. I don’t care about being governor. I very much care about the future of West Virginia.”

He said he was very surprised when he took over as commerce secretary that the public couldn’t make on-line reservations for the state parks.

Thrasher said it was also frustrating when Toyota-Mazda was seeking a plant in West Virginia, and there had been no inventory of properties available for development compiled by past administrations.

“I position myself and my companies so when opportunities happen, we can capture those opportunities,” he said. “You have to be prepared, and it was glaring to me West Virginia was not prepared.”

Thrasher never expected to enter politics, but had always focused on keeping his businesses profitable.

He employs 700 employees at the Thrasher Group, and said their average age is 33.

“We’re importing work from other states because there is not enough work in West Virginia to keep them busy.”

He admires other West Virginia firms such as Touchstone, who ships their products all over the world.

“We have quality of life (in West Virginia), and for the younger generation quality of life is everything,” Thrasher said. “They’re not going to work where they don’t have it, and we’ve got it.