Goal is to reduce rate of employee absenteeism 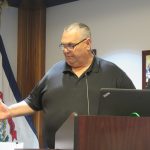 WHEELING — The union representing Ohio County Schools service employees has arranged for reduced rate memberships at the Wheeling YMCA for school employees, and is asking the board of education to pick up the cost.

Ames told the board this week he met with Adam Shinsky, executive director of the Wheeling YMCA, and the pair worked out an agreement where Ohio County Schools employees could become members at the YMCA for $200 a year. There would be an additional $85 charge for a spouse.

There are about 800 active employees in Ohio County Schools, including both teachers and service employees, he said.

Board of education members determined the cost to be $40,000 annually if 200 employees took advantage, and as much as $160,000 if all participated. The cost for including the spouse isn’t being requested by the union, and the option would only be open to union members.

Presently, employees who have no “dock days” during the school year receive an incentive bonus of $1,350 in June. Employees have 14 personal days to use before they incur a dock day, while the cost of employee absences and paying for substitutes has become a financial burden to the school district.

Recent years have seen the cost of payments to substitute employees exceed $1 million during the school year.

“Our group wants to get the absenteeism down, and that’s something that we’re working on,” Ames told the board. “We want to get our people to come to work more often, and not use up those funds.

Board members took the matter under advisement, with board president Zach Abraham thanking Ames for the work done to achieve the agreement.

“Regardless of how this works out with the board, I think this could be a great resource for us,” board member Sarah Koegler said. “It’s a great agreement to have.”

Ames said the union also would like the board to finally define whether the $1,350 is an incentive bonus to curb employee absenteeism, or a supplement to help pay health care costs. If it is a supplement, it should be given to employees without stipulations, according to Ames.

The union also is asking for a pay raise for all Ohio County service personnel, but does not specify an amount for that raise. It is also seeking continuation of employee eye and dental coverage, and additional cleaning equipment for Wheeling Park High School.