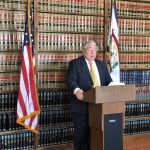 WHEELING — West Virginia Attorney General Patrick Morrisey sought to add claims Tuesday in his lawsuit against the Diocese of Wheeling-Charleston, including a new count of unfair competition and new evidence of the church’s failure to conduct background checks and report abuse.

The amended complaint details allegations the Diocese chose not to publicly disclose a report of child sexual abuse by a teacher in 2006 and permitted several individuals to work or volunteer at Catholic schools without adequate background checks.

Other priests credibly accused of sexual abuse were also allowed to work in the Diocese without adequate background checks. The Diocese only released its list of credibly accused priests after the State of West Virginia issued its subpoena.

“How can anyone reasonably argue that these allegations are old when the Church refused to release its list of credibly accused priests until after the issuance of our subpoena in the fall of 2018?” Attorney General Morrisey said. “The Church needs to come clean and end the secrecy.”

Diocesan spokesman Tim Bishop said the Diocese had not yet been provided a copy of the amended complaint, and thus could not comment on the new allegations.

The unfair competition count alleges the Diocese omitted material facts when it advertised for prospective students to join its schools and camps. This omission prevented parents purchasing its services from realizing allegations that the Diocese knowingly employed priests who had admitted to or had been credibly accused of sexually abusing children and failed to conduct background checks.

The amended complaint alleges the Diocese relied upon Bishop Michael J. Bransfield’s policy of nondisclosure when it failed to publicly report allegations of a Catholic school teacher abusing a teenage student in Kanawha County. An internal investigation in 2006 alleged the teacher gained the student’s trust with alcohol and prescription drugs, before multiple instances of sexual abuse on and off school property.

The amended complaint also includes new allegations against Victor Frobas during an assignment at St. Paul’s Roman Catholic Church in Weirton from 1980 to 1982. There the now-deceased priest pulled elementary school children out of classes and is accused of using video games to gain the trust of those who were then abused in an on-site residence.

Prior to his Weirton assignment, Frobas had been accused of incidents at Camp Tygart, now known as Camp Bosco, in Huttonsville, Wheeling Central Catholic High School and Philadelphia.

The amended complaint cites incidents in Kanawha and Cabell County in adding to allegations that the Diocese did not conduct adequate background checks.

As of May 2008, background checks had not been performed on as many as 22 employees and volunteers working at a single Catholic school in Kanawha County dating back to August 2007. The amended complaint alleges Bishop Bransfield was made personally aware the background checks were not completed.

Additionally, an individual who had never completed training and never completed a background check was permitted to hold various positions at Catholic schools in Cabell County from 2004 to 2016, including stints as a chaperone on overnight trips and as a guest teacher.

The Attorney General filed his original lawsuit in March alleging the Wheeling-Charleston Diocese knowingly employed pedophiles and failed to conduct adequate background checks for those working at the Diocese’s schools and camps, all without disclosing the inherent danger to parents who purchased its services for their children.

The civil complaint alleges those actions lacked transparency and stood in sharp contrast to the Diocese’s advertised mission of providing a safe learning environment.

The Attorney General, who initiated the investigation in September 2018, brought the action against the Diocese and Bransfield for violations of the state’s consumer protection laws, in addition to seeking a permanent court order blocking the Diocese from the continuation of any such conduct.